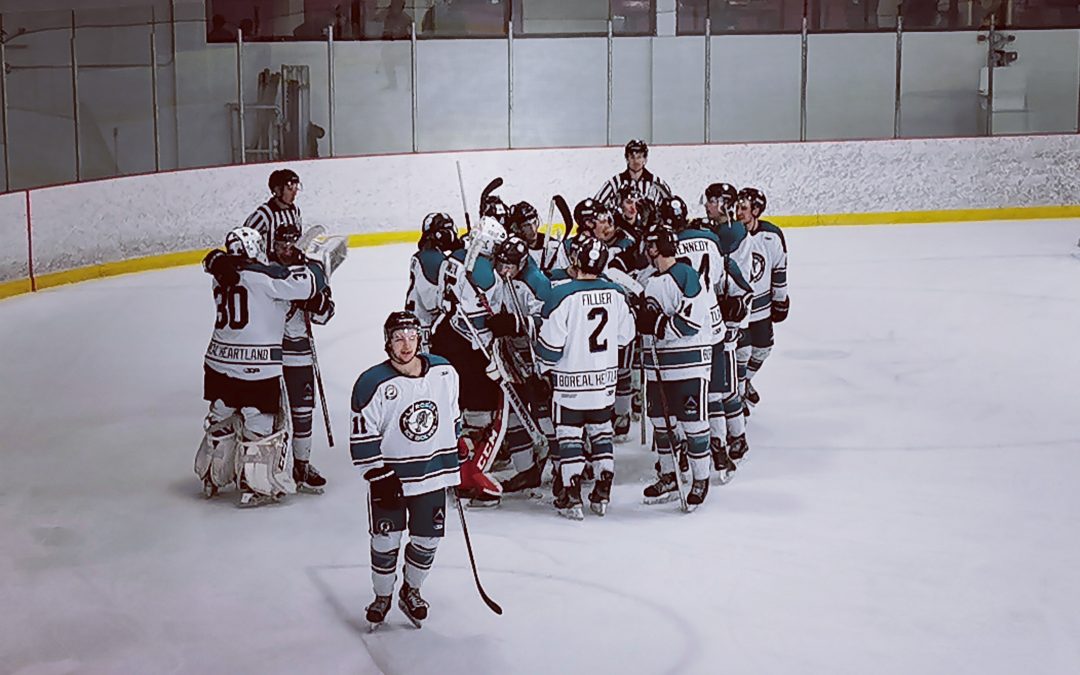 For the first time since 2016, the La Ronge Ice Wolves are heading back to the post-season.

The Ice Wolves clinched their spot following Saturday’s action in the SJHL. La Ronge finished off a four-game southern swing with a 4-3 victory in overtime Saturday night in Wilcox versus the Notre Dame Hounds.

“It feels great (clinching a playoff spot),” said La Ronge goalie Xavier Cannon. “Just knowing the team’s history, it’s been a few years since we’ve made it to playoffs.”

Guillaume St. Onge and Sho Takai would score in the second period for Notre Dame, which gave the Hounds a 3-1 advantage through the first 40 minutes of action.

The Ice Wolves made it a 3-2 game just 44 seconds into the third when Jordan Mish wired home his 12th of the season past Logan Dyck, who made 35 saves in the loss. La Ronge tied the game at three on the power play when Spencer Kennedy sent a twisted wrister into the back of the net for his 11th of the campaign. Prior to Kennedy scoring, the Ice Wolves nailed the iron twice on the man advantage on the same sequence.

Regulation solved nothing, so the Ice Wolves and Hounds required overtime. Following a huge save by Xavier Cannon, La Ronge raced into the Notre Dame zone and James Philpott beat Logan Dyck upstairs on a three-on-one, which sent the Ice Wolves home with a very successful 3-1 record on their southern swing.

“It was a good save by Cannon, he was making them all night,” said La Ronge defenceman James Philpott. “I kind of saw a chance to jump up into the play with Ty Budai and Jordan Mish. Kind of held back, Mish waited for the last second and slid it over to me, and managed to go post and in.”

With the win, the Ice Wolves improved to 29-19-5 on the campaign, which has them holding down fourth in the SJHL standings.

La Ronge will now look for its third straight victory on Wednesday at home when they host the Estevan Bruins for the final time during the regular season.

Following next Wednesday’s matchup with Estevan, the Ice Wolves will host Weyburn next Friday and Notre Dame next Sunday.