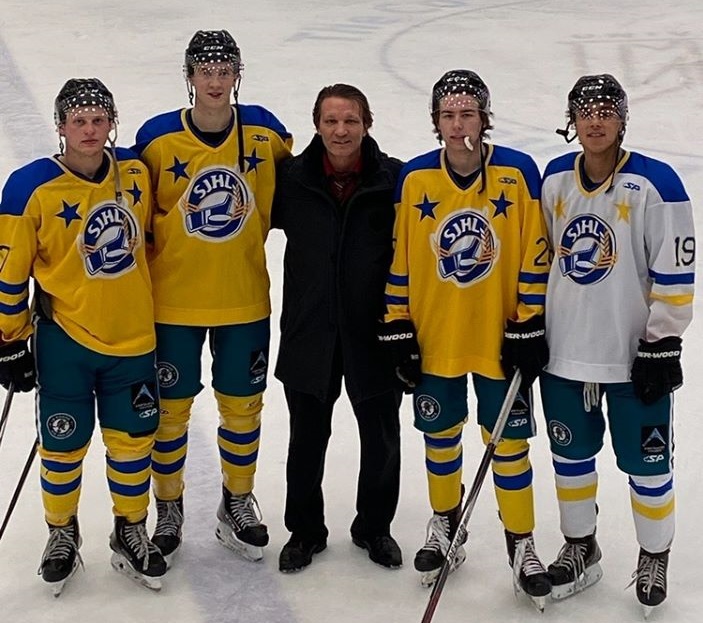 The SJHL/MJHL Showcase wrapped up in Regina Wednesday.

Ford, who has tallied 40 points in 45 games this season, says it was a great experience.

“I thought it was really good,” said Ford. “It was well-organized, good speakers, good hockey, good atmosphere, good fans, it was awesome.”

Defenceman James Philpott has collected 19 points in 25 games with La Ronge since being acquired in a blockbuster trade with the Melville Millionaires. The Calgary, AB product admits, the games at the showcase in Regina were more intense than he originally anticipated.

Ice Wolves Head Coach and GM Kevin Kaminski helped coach Team Mitchell at the showcase with Doug Johnson, who is the head coach of the Nipawin Hawks.

“Obviously, Greyeyes had a really good first game, had a goal,” said Kaminski. “In the second game, he actually broke his collarbone, that’s not good news for the Wolves here, but you know what? We’re going to have to have someone step up and pick up the slack here for him.”

Kaminski also says he’s expecting 20-year-old forward Booker Chacalias to be back in the lineup Wednesday when La Ronge hosts Weyburn. Chacalias has not played since he left a game in Melfort Nov. 20. In eight games with the Ice Wolves this season, the Calgary, AB product has recorded 11 points.

Wednesday’s matchup with the Weyburn Red Wings gets underway at 7:30 p.m. from the Mel Hegland Uniplex. Following Wednesday’s game, the Ice Wolves will host the Estevan Bruins next Friday night before travelling to Flin Flon next Saturday evening.

You can catch next Saturday’s battle from the Whitney Forum in Flin Flon on MBC Network Radio with Braden Malsbury.

(PHOTO: The Ice Wolves were represented by four players at the showcase in Regina. Photo courtesy of the La Ronge Ice Wolves, Facebook.)