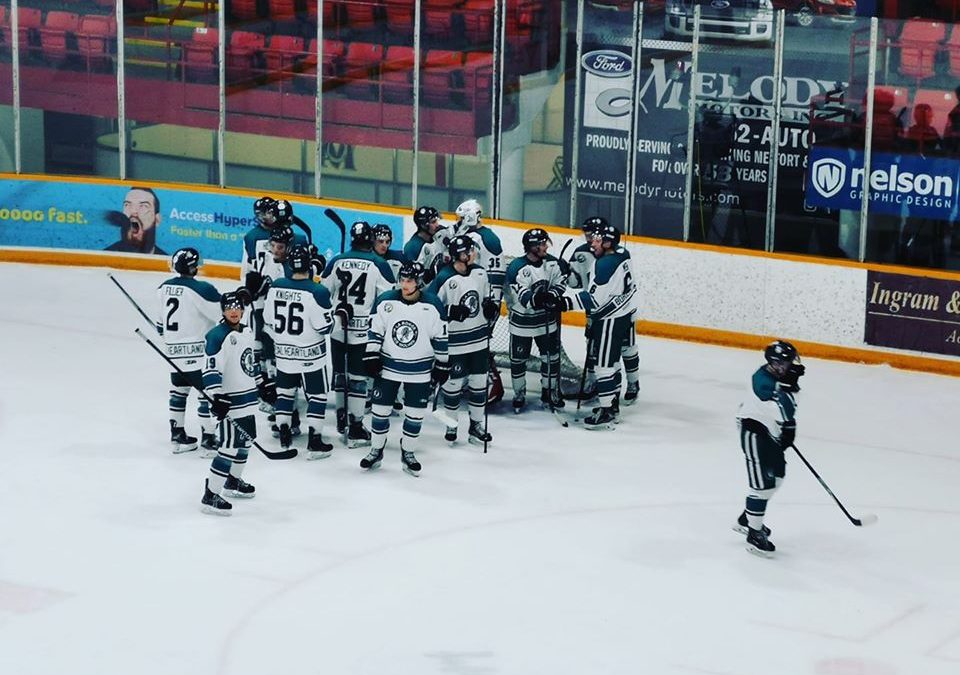 The La Ronge Ice Wolves snapped a three-game losing streak on Wednesday night in Melfort when they dumped the Mustangs 3-2.

“It’s definitely a good way to start the week, I think it was a bit of an ugly game, but we got it done in the end,” said Ice Wolves Associate Coach Gaelan Patterson. “We definitely have some work to do here as we get set for the Battlefords on Friday.”

After a scoreless opening frame, the Mustangs opened the scoring 3:55 into the second frame when Ben Tkachuk walked down the right side and beat Xavier Cannon upstairs for his seventh of the season. The Ice Wolves replied and tied the game at one 5:06 into the second when Logan Holm waltzed down the left wing and rifled home his fourth of the season past Shawn Parkinson.

The Ice Wolves took a 2-1 lead 12:40 into the third when Holden Knights flew into the Melfort zone and deked out Parkinson for his first of the season. La Ronge added some insurance 17:39 into the third when Kyle Ford fed Jake Gudjonson, who made no mistake on a two-on-one. Kyle Bosch would add a late marker for Melfort, but the Ice Wolves hung on for the victory.

Not only was Gudjonson’s goal the game-winner and his 12th of the campaign, but it came in his 100th SJHL game. The Golden B.C. product gave credit to Kyle Ford, who had the primary assist on his goal.

“I was pretty tired at the end of my shift, I saw Ford get the puck, we had a two-on-one,” said Gudjonson. “I just tried to skate as hard as I could and open up, like Killer always makes us practice — seems to work pretty good. Ford fed me a beautiful pass and it found its way into the net.”

Xavier Cannon made 25 saves in the La Ronge net for his third win of the season, while Shawn Parkinson turned away 27 shots in a losing cause.

With the win, the Ice Wolves improved to 23-16-5, which still has them sitting in fourth in the SJHL standings at the moment.

The Ice Wolves will look for their second straight win on Friday night in North Battleford against the league-leading North Stars. You can catch Friday’s tilt on MBC Network Radio with Braden Malsbury. The pre-game show is scheduled to get underway at 7:15 p.m.

After Friday’s matchup, the Ice Wolves will not play until Jan. 29 at home when the Weyburn Red Wings come to town for a 7:30 p.m. puck drop.

(PHOTO: The Ice Wolves made their third trip of the season to Melfort Wednesday. Photo courtesy of Braden Malsbury.)