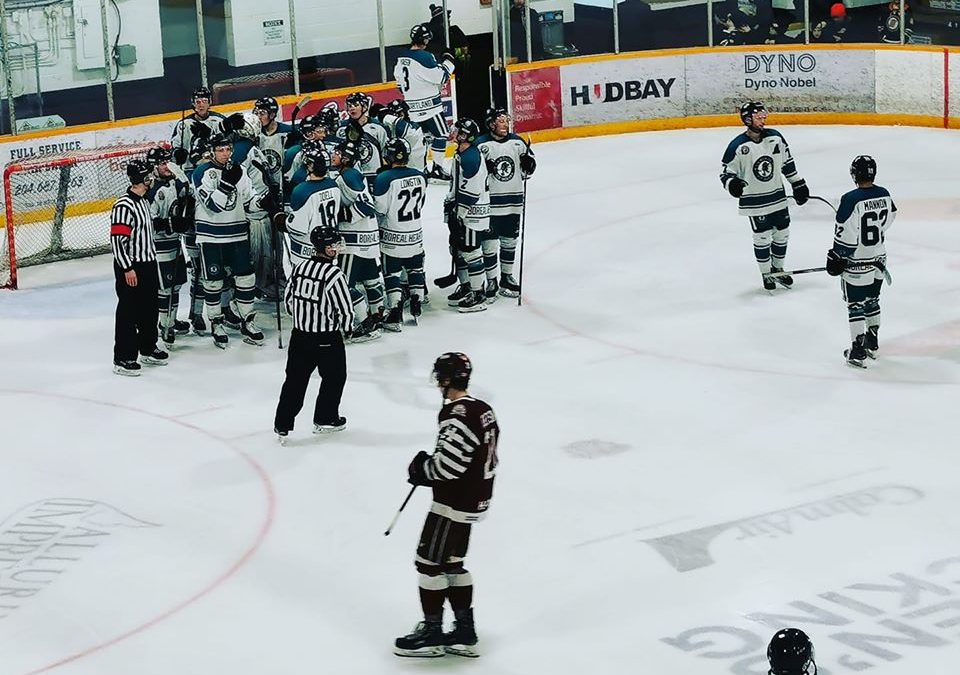 The La Ronge Ice Wolves picked up their fifth straight victory on Friday in Flin Flon when they beat the Bombers 5-3.

“It was a great first period by us, I think the guys had a couple good practices and got their feet under them,” said Ice Wolves Associate Coach Gaelan Patterson. “We came out hard, especially on a road game. In the second period, they came back, we knew that would happen — they’re a pretty good team. We found a way in the end, so it was a pretty exciting game.”

The Ice Wolves didn’t waste any time getting on the board. Kyle Ford found Daylon Mannon, who ripped home his team-leading 26th goal of the season past Jacob Delorme 1:50 into the game.

La Ronge took a 2-0 advantage 4:42 into the first when Grant Longtin knifed home his eighth of the season at the side of the net. The Ice Wolves made it a 3-0 game 13:18 into the opening stanza when Stewart Pond found the back of the net from the perimeter for his second of the campaign. The Bombers responded with 19 seconds left in the first on the power play when Tristan Lemyre wired a one-timer past Liam McGarva from the left circle, which made it a 3-1 contest.

It was not the second period the Ice Wolves were hoping for, as Cole Rafuse and Caleb Franklin both scored for the Bombers, which made it a 3-3 score heading into the third period. Flin Flon outshot La Ronge 25-6 in the middle frame and Liam McGarva made several key stops throughout the period. McGarva turned away 46 shots for his league-leading 19th victory Friday evening.

Rowan Barnes notched the eventual game-winner 14:09 into the third when he found the puck in the right circle and sent a shot on net that snuck through Jacob Delorme. With seven seconds left in regulation, Grant Longtin scored an empty-netter, which sealed the victory for La Ronge.

With the win, the Ice Wolves improved to 22-14-4 on the season, which has them still occupying fourth in the SJHL standings. The Ice Wolves are just three points back of Flin Flon for second place.

The Ice Wolves have recorded points in nine straight games. They will look for their sixth straight victory on Saturday at home versus the Bombers in the conclusion of the home-and-home series.

“We’re going to have to expect their best, I think they are obviously going to be hungry, they need a win for sure and they are going to be desperate,” said Ice Wolves Associate Coach Gaelan Patterson.

Saturday’s game gets underway at 7:30 p.m. from the Mel Hegland Uniplex in La Ronge. The Ice Wolves now lead the season series 4-2 with the Bombers and the have won the last four matchups.

Meantime, following Saturday’s action, the Ice Wolves will open a home-and-home set with the Hawks in Nipawin on Jan. 10.