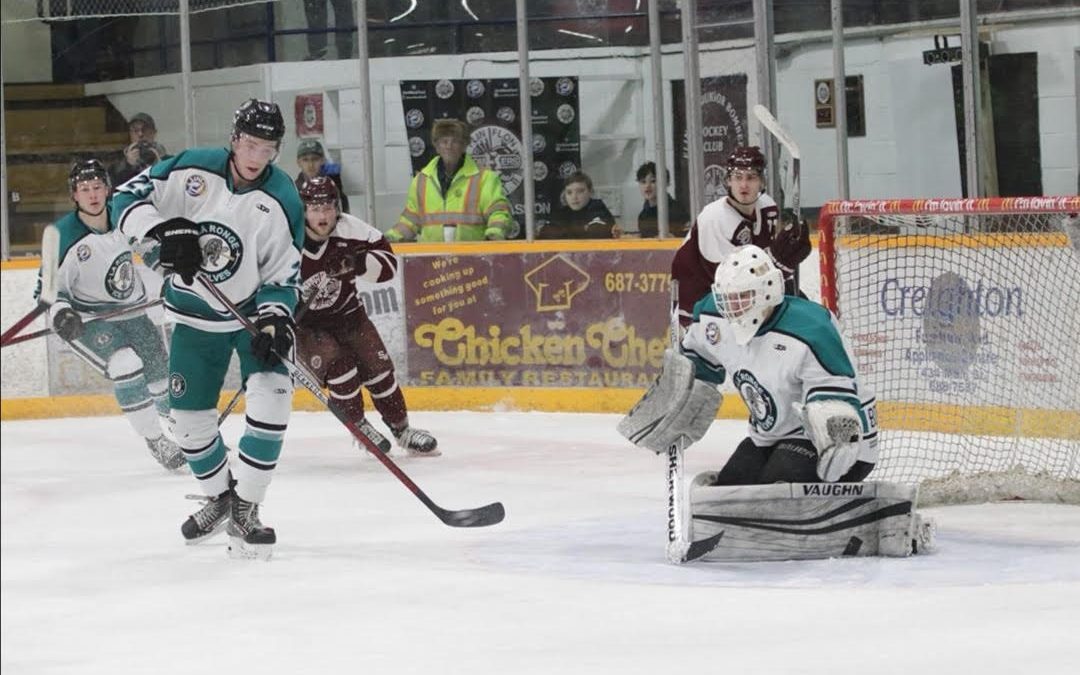 The La Ronge Ice Wolves erased a three-goal deficit and beat the Flin Flon Bombers 7-6 in overtime on Saturday night at the Whitney Forum.

“Definitely not a textbook game by us and I don’t think Flin Flon played their game either,” said Ice Wolves Associate Coach Gaelan Patterson. “Sometimes they’re (wins) ugly and they don’t happen the way you want it, but we pulled through in the end and it was pretty exciting.”

Aaron Greyeyes tied the game at six with eight seconds left in regulation and then potted the overtime winner 3:15 into the extra session for his 15th of the campaign.

In the extra frame, Greyeyes and Jordan Mish flew into the Flin Flon zone on a two-on-one. Greyeyes went upstairs after getting the nifty cross-ice pass from Mish, which ended the game and sent the Ice Wolves into the Christmas break on a four-game win streak.

“He’s (Greyeyes) clutch,” said Ice Wolves Associate Coach Gaelan Patterson. “Probably not his strongest game to be honest, but he just came up big in the end. He’s had a great year, he’s a rookie in the league, we expect some big things out of him. This year, as a rookie, we rely on him quite a bit.”

Daylon Mannon also scored twice on Saturday for La Ronge, while James Philpott, Jake Gudjonson and Kevin Fillier rounded out the offence. Liam McGarva made 49 saves for his league-leading 18th win of the season.

Donavan Houle found the back of the net twice for the Bombers, while Reid Robertson, Jaeden Mercier, Chase Haygarth and Easton Haygarth also tallied. Jordan Berschiminsky made 34 saves in the loss.

With the win, the Ice Wolves have now recorded points in eight straight games. La Ronge improved to 21-14-4, which has vaulted them into fourth in the SJHL standings. The Ice Wolves are 14-3-2 since their trade with the Melville Millionaires at the end of October.

The Ice Wolves will look for their fifth straight win Jan. 3 in Flin Flon when they return from the holiday break. You can catch the action on MBC Network Radio with Braden Malsbury. The pre-game show gets underway at 7:15 p.m.

Saturday’s win in Flin Flon was the first time the Ice Wolves have won at the Whitney Forum since Jan. 19, 2018 when La Ronge topped the Bombers 4-3 in overtime.

(PHOTO: The Ice Wolves made their second trip to Flin Flon this season Saturday. Photo courtesy of Kelly Kocur Jacobson.)