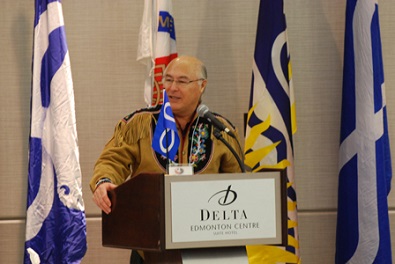 Political tensions are at boil point within the Métis Nation, leading President Clem Chartier to step back from his position, but not resign.

Chartier expressed two issues, which contributed to his decision.

He said the Métis Nation-Saskatchewan complained to the Law Society of Sask. alleging that he is in conflict of interest over representing the MN-S in a federal lawsuit over a land claim in Sask. and Alberta.

“I formally went on record as no longer representing the MN-S, even though I probably didn’t legally or technically,” stated Chartier. “On that basis, they’re saying I can’t represent the plaintiffs because of my role as a lawyer whatever it was for the MN-S.”

The legal documents were filed in a Saskatoon court October 16, 2019. Chartier says the complaint was made the next day.

Chartier said achieving a land claim deal in the province was a longtime political goal.

He is the only lawyer listed to represent Saskatchewan.

He cites a conflict with MN-S president Glen McCallum as creating a distraction prior to the next budget cycle.

The second quarrel brewing could also have devastating effects for the Métis is whether to allow Metis Nation-Ontario to be a recognized member of the National Council. Chartier said Ontario has not historically been affiliated, but that Métis of Alberta and Saskatchewan support the move, but opposed by the Manitoba Metis Federation.

Chartier contents the MMF could pull out if Ontario is recognized.

“The Manitoba Métis Federation in September, their 3000 delegate’s unanimously passed a resolution stating that if Alberta and Saskatchewan Métis support MN-O staying in, then the MMF has the authority to walk away from the Métis National Council,” Chartier explained.

Chartier says he will not seek re-election after 16 years as president in the 2020 election.

He has not ruled out challenging McCallum for the MN-S top job. Manitoba Métis Federation President David Chartrand will take over some of the president’s roles.