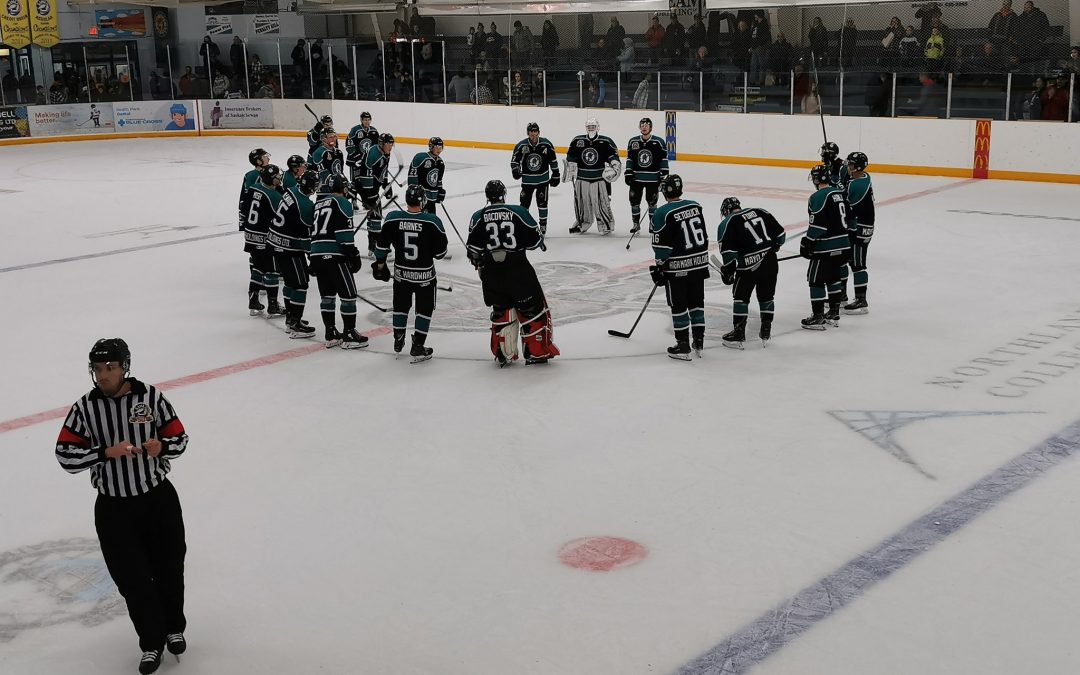 The La Ronge Ice Wolves snapped a short two-game slide when they tamed the Melfort Mustangs 4-3 in overtime Tuesday at the Mel Hegland Uniplex.

“We’ve been playing very well, very hard, playing with passion and everything,” said Ice Wolves Head Coach and GM Kevin Kaminski. “First period, we came out a little flat, so I had to give them a little tongue-lashing and the boys responded, hats off to them.”

The Ice Wolves appeared to have the edge in scoring chances early in the game, but then the Melfort Mustangs carried the play in the second part of the first. Melfort’s Jake Hobson opened the scoring 12:38 into the first when he snapped home a power play marker from the point. Lucas Ochitwa gave Melfort a 2-0 lead 14:15 into the opening stanza.

The Ice Wolves looked like a motivated club early in the second period. Aaron Greyeyes got La Ronge on the board 2:17 into the period when he took a feed from Kyle Ford and beat Shawn Parkinson upstairs for his third of the campaign. The Ice Wolves tied the game two 3:02 into the frame when Jake Gudjonson drove the crease and beat Parkinson on the ice for his first of the year. The Ice Wolves pulled ahead 3-2 13:53 into the second after Kyle Ford notched his fifth of the season. Daylon Mannon sent a nifty feed to Ford, who made no mistake.

The Mustangs tied the game at three 4:09 into the third following a Zach Anderson marker. Zack Smith had a penalty shot 13:35 into the third, but he was denied by Liam McGarva, who ended his night with 31 saves.

Regulation solved nothing, so for the second time this season, the La Ronge Ice Wolves went to overtime. Zach Bannister threaded the needle upstairs 2:20 into the extra session, giving the Ice Wolves the extra point and the win.

“Things have been pretty frustrating lately for me, but I’ve talked to some people, talked to coach,” said Bannister. “I just got to stick with the process and trust it — and good things will come your way. You’ve got to do the little things, so it was a lot of weight off my shoulders to get that one.”

With the win, the Ice Wolves improved to 3-7 on the season. They will search for their second straight victory on Tuesday in Wilcox with they start a four-game swing against the Notre Dame Hounds. You can catch Tuesday’s game live on MBC Network Radio with Braden Malsbury, the pre-game show begins at 7:45 p.m.

Meantime, the Ice Wolves have acquired 20-year-old forward Kyle Schneider from the Melfort Mustangs in exchange for a player development fee.