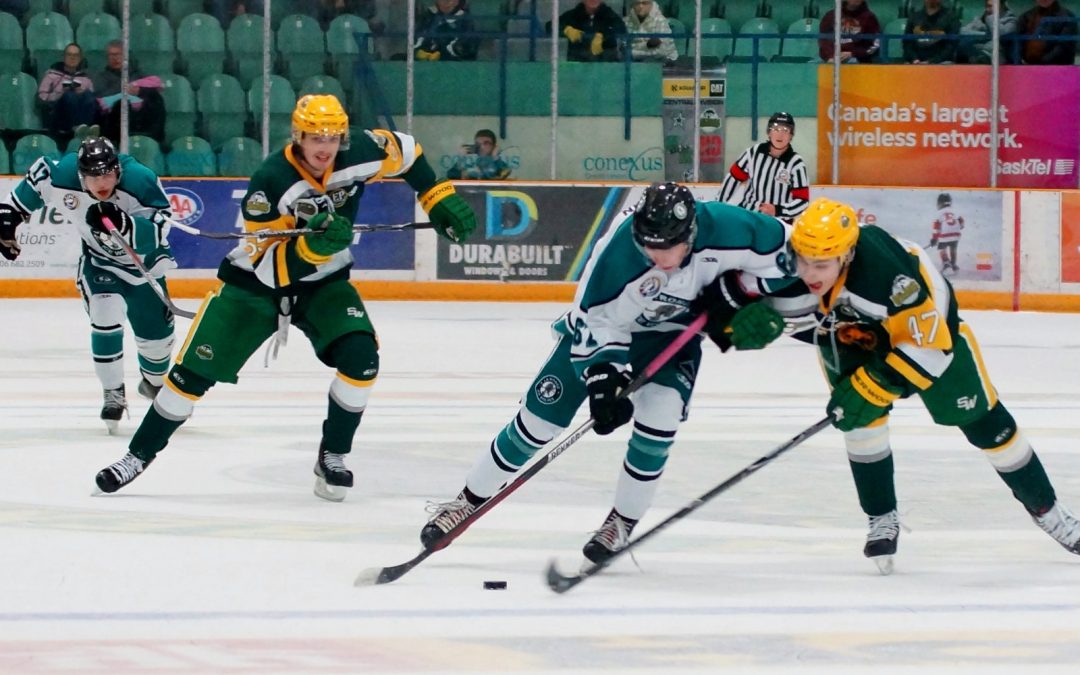 Three members of the La Ronge Ice Wolves have been recognized for their strong play.

Forward Daylon Mannon has been named the SJHL Player of the Week. In four games last week on a southern road trip, the Fresno, CA product tallied nine points. Heading into Tuesday’s action in the SJHL, Mannon led the SJHL in scoring with 24 points in 14 games this season.

“It’s good coming into a Canadian league being an American guy (to be recognized),” said Mannon. “It’s good for me, a good personal stat right there, but we had a good weekend. The points are going to come when we’re playing good.”

Kyle Ford, who is Mannon’s linemate, picked up the rookie of the week honours. Ford, from Calgary, AB, has goals in five straight games. During the four-game swing, he scored five times. Ford sits 10th in SJHL scoring right now with 17 points.

“On the road trip, I just tried to keep it simple, play my game, not try to not think about it,” said Ford. “I mean anytime you have a streak alive, the last thing you want to do is overthink.”

Liam McGarva had quite the road trip as well. He started things off with a 5-0 shutout win in Wilcox versus the Notre Dame Hounds last Tuesday. He followed that up with a 29-save shutout in Weyburn Wednesday before backstopping the Ice Wolves to a 5-4 victory in Estevan last Friday. McGarva, a Fort Saskatchewan, AB product, has posted a 2.51 GAA and .926 save percentage this season. For his recent efforts, he was named SJHL Goalie of the Week.

“I’m feeling good right now, it’s a lot easier when everyone else is going too. When the team is playing good, it’s an easier night on me,” said McGarva. “I saw Mannon and Ford got recognized too. It’s really nice to get recognized after a big streak.”

The Ice Wolves get back into the swing of things on Wednesday night at home when they host the Battlefords North Stars for the third time this season. The Ice Wolves will wear their new third jerseys.

Meantime, after starting the season 0-5, the Ice Wolves are 6-3 in their last nine games and currently sit in seventh place in the overall standings.

You can catch both games this weekend on MBC Network Radio with Braden Malsbury.