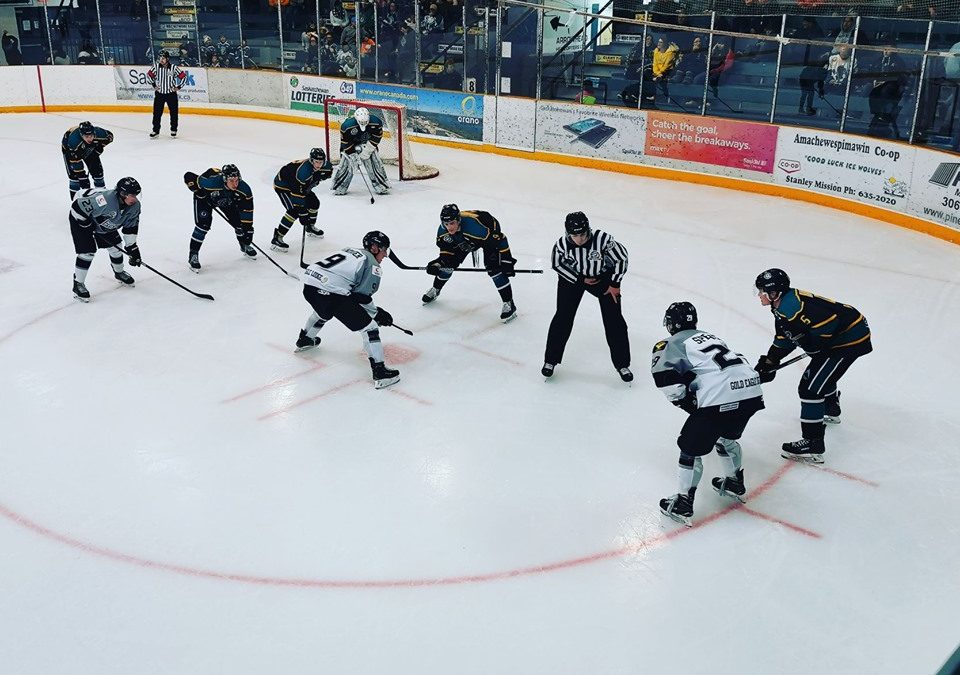 It was not the result they were looking for, but the La Ronge Ice Wolves earned a single point on Wednesday at home when they dropped a 4-3 decision in overtime to the first-place Battefords North Stars.

“I thought we played a very solid 60 minutes,” said Ice Wolves Head Coach and GM Kevin Kaminski. “We went up 1-0 and we played an awesome 18 minutes of the first period. In the last three shifts, we stood around and stirred soup, and they were all over us. They scored a late goal with two seconds left — that can’t happen.”

The Ice Wolves opened the scoring 10:49 into the first when Jordan Mish fed Dylan Thackeray, who rifled home his second of the season past Austin Schwab. At the 12:09 mark of the first period, a multiple-fight situation broke out that resulted in six players being escorted off the ice. The North Stars tied the game with two seconds remaining in the first when Dylan McCabe sent an offering from the point past Liam McGarva, who made 43 saves in the loss.

The Ice Wolves took a 2-1 advantage 8:06 into the second when Daylon Mannon threaded the needle for his 10th of the campaign. The North Stars tied the game at two just over a minute later when Noah Form banked a rebound into the back of the cage.

The North Stars took their first lead of the game 34 seconds into the third on the man advantage following an Austin Becker marker. The Ice Wolves would tie the game at three 11:59 into the third when Kyle Ford netted his 11th of the season in tight.

Dace Prymak propelled the Stars to victory 2:55 into the extra session when he beat a sprawling Liam McGarva.

With the loss, the Ice Wolves slipped to 6-8-1 on the season, which has them occupying sixth in the overall standings in the SJHL.

The Ice Wolves are back in action on Friday in Yorkton when they face the Terriers for the first time this season. You can catch the action on MBC Network Radio with Braden Malsbury. The pre-game show gets underway at 7:15 p.m.

La Ronge will then close out its weekend on Saturday night in Churchbridge when they clash with the Terriers in a neutral-site affair.