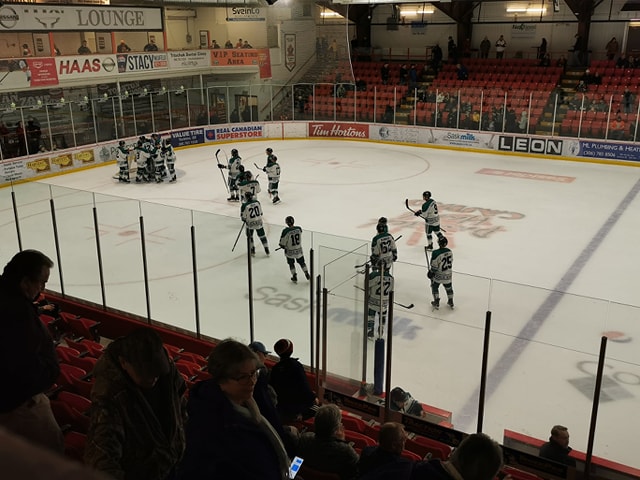 The La Ronge Ice Wolves started a short two-game swing with a 6-4 victory in Yorkton on Friday night versus the Terriers.

“It’s good to get the points, but it was a pretty sloppy game,” said Ice Wolves Associate Coach Gaelan Patterson. “We had a lot of passengers, so did they, obviously. We’ve got to be better.”

The Ice Wolves opened the scoring 9:12 into the first period when Jake Gudjonson found Spencer Kennedy, who notched his first SJHL goal upstairs on Phil Bond in the slot.

The Terriers tied the game at one 1:15 into the second following a Chantz Petruic penalty shot. Petruic deked out Liam McGarva, who made 31 saves for the victory. La Ronge took a 2-1 advantage 3:19 into the frame when Kalem Hanlon fired a shot from the right point past Phil Bond on the power play.

The Ice Wolves took a two-goal lead 11:04 into the stanza after Spencer Kennedy potted his second of the night. The Terriers made things interesting with eight seconds left in the second on the man advantage when Jordan Guiney deflected an offering home, which made it a 3-2 game.

Yorkton tied the game at three 1:06 into the third when Ryan Granville sent a perimeter offering past Liam McGarva. The Ice Wolves answered the call just 18 seconds later when Kalem Hanlon recorded his second of the night, giving La Ronge a 4-3 lead.

Daylon Mannon gave the Ice Wolves some insurance 7:08 into the third when he picked up the puck behind the net and lifted it into the cage in the air for a lacrosse-style marker. Both teams would exchange goals again later in the frame, as the Ice Wolves hung on for the victory.

“It’s a nice feeling to get on the scoresheet, for sure,” said La Ronge forward Spencer Kennedy. “Bannister and Gudjonson were unbelievable to play with tonight, they set me up. That first goal, I was in the slot all alone, couldn’t really make a mistake there, those guys just set it all up.”

With the win, the Ice Wolves improved to 7-8-1 on the season, which still has them sitting in sixth place in the overall standings.

The Ice Wolves will search for their second straight win on Saturday in Churchbridge when they clash with the Terriers in a neutral-site affair. You can catch the action on MBC Network Radio with Braden Malsbury. The pre-game show is slated to get underway at 6:45 p.m.

(PHOTO: The Ice Wolves made their first visit to Yorkton Friday. Photo by Braden Malsbury.)