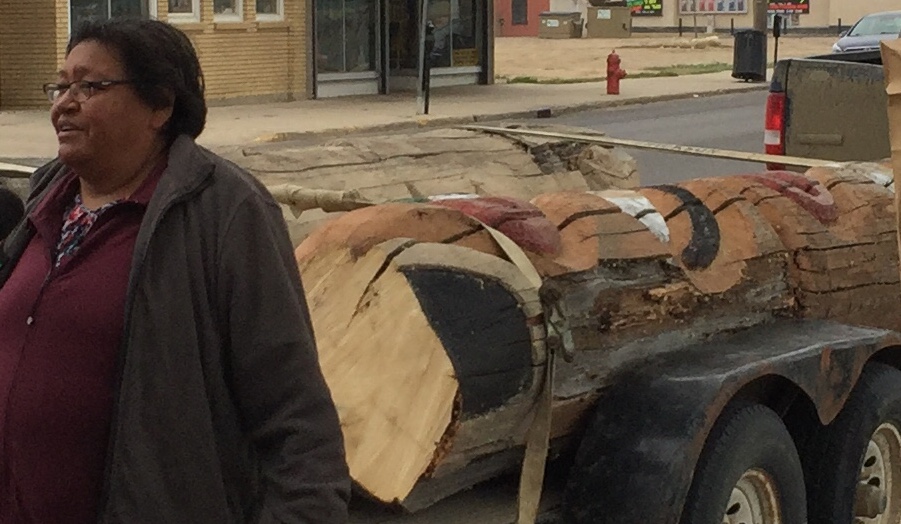 Prince Albert’s longstanding totem pole is on the move to the Okanese First Nation.

The city held a special moving ceremony Monday morning for the Eaglechild Totem Pole along the banks of the North Saskatchewan River with about 30 people in attendance.

The plan to move the totem pole to Okanese is being spearheaded by Darlene Stonechild, sister of one of its carvers Dale Stonechild.

Darlene Stonechild said moving the totem pole to the family’s home community was her brother’s idea.

“He’s happy that’s it’s going to be shown to his grandchildren, his family and I’ll have a piece of him in my backyard,” she said.

The totem pole was carved by James Sutherland with the assistance of Dale Stonechild in 1975, while both were inmates at the Saskatchewan Penitentiary, and then donated to the city.

Sutherland has since passed away and Stonechild remains incarcerated in B.C.

The city determined earlier this year the totem pole needs to be moved as the wood at its base is rotting and poses a safety risk.

Prince Albert Historical Society board member Fred Payton said the two men carved and donated the totem pole in appreciation of what people of the city had done for inmates in terms of programming services in the mid-1970s.

“Corrections was kind of on the cusp of moving from punishment to rehabilitation,” he said. “And so, what happened was people were coming into the institution, from the community, and participating in interactions with the offenders.”

After consulting with various Indigenous stakeholders, the city had been planning to lay the totem pole to rest in a cemetery near the Saskatchewan Penitentiary before it was contacted by Darlene Stonechild.

(PHOTO: Darlene Stonechild stands in front of pieces of Prince Albert’s longstanding totem pole which are on their way to the Okanese First Nation. Photo by Fraser Needham.