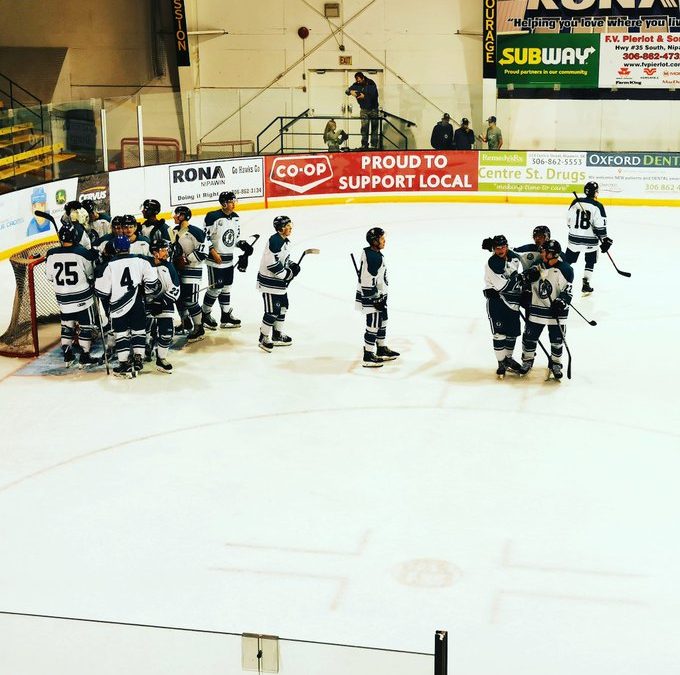 The La Ronge Ice Wolves ended the pre-season with a 3-2 victory on Saturday in Nipawin versus the Hawks.

“I thought we had a little more jump tonight (compared to last night),” said Ice Wolves Head Coach and GM Kevin Kaminski. “We were a lot more disciplined tonight. The boys responded, they had their heads screwed on straight here and they came to play.”

The Hawks got on the board 6:24 into the game when Eric Sorensen beat Shaemus McLeod, who started the game in the La Ronge net.

The Ice Wolves tied things at one 11:57 into the first on the man advantage when Logan Holm drove to the net and banked home the rebound.

“The team never gave up, we maintained our physicality throughout the whole game,” said Holm. “We used our size to our advantage, made good plays when we could. We locked it down at the end of the game and didn’t allow anything.”

La Ronge took its first lead of the game 29 seconds into the second stanza when Aaron Greyeyes sent home the biscuit on the power play, giving the Ice Wolves a 2-1 lead. The Ice Wolves took a two-goal advantage 9:45 into the middle period when Spencer Kennedy flew down the left side and sent a clapper into the back of the Nipawin net.

The Hawks would add a marker in the third period, but the Ice Wolves held on for the win.

With the victory, the Ice Wolves ended the pre-season with a 2-1 record. La Ronge will now get set for the regular season, which begins next Friday evening in Flin Flon against the Bombers. You can catch that one on MBC Network Radio with Braden Malsbury.

The Ice Wolves will then play their home opener the next night versus the Bombers in the conclusion of the home-and-home series.

(PHOTO: The Ice Wolves closed out the pre-season with a win Saturday. Photo by Braden Malsbury.)