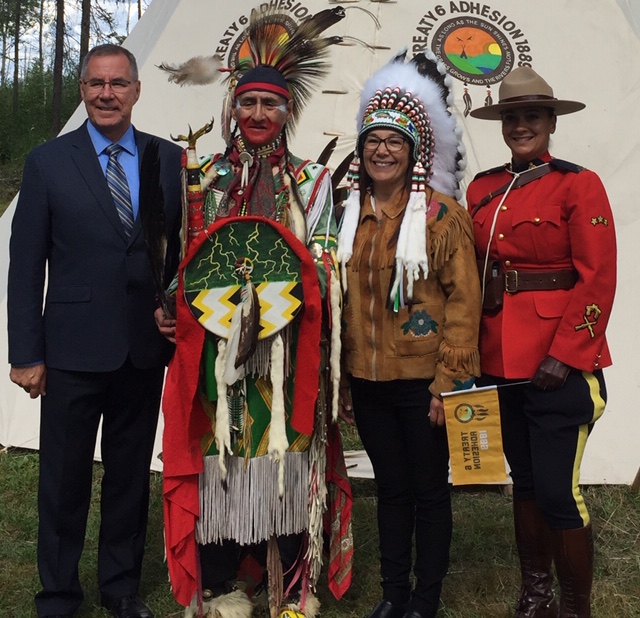 More than 100 people braved the rainy weather Wednesday to celebrate the 130th anniversary of the Treaty 6 Adhesion.

The Lac La Ronge Indian Band and Montreal Lake Cree Nation signed on to the agreement with the Crown in February 1889.

It was a special day for Russ Mirasty as not only is he a Lac Lac Ronge Indian Band member; he is also Saskatchewan’s newest lieutenant governor.

“It’s special because I’m a Lac La Ronge Indian Band member and, along with the other two First Nations who are celebrating the adhesion, my roots go back to that,” he says. So, because being a lieutenant governor, really as a representative of the Queen or the Crown here in the Province of Saskatchewan, it puts a whole different light on it. Because now I am kind of in both worlds, right? So, it’s much more meaningful.”

Aside from Mirasty, a number of other dignitaries were on hand including Assembly of First Nations Chief Perry Bellegarde.

He says this year’s celebrations are significant for a number of reasons.

“As part of that 130 years of commemoration, they unveiled a flag – Treaty 6 Adhesion flag,” he says. “That’s important in itself, as well, to educate people about the promises that were made from the Crown. As First Nations people, we’re sharing land and resources, a lot of land and resources with everybody in Canada. And in exchange for sharing that land and resources there were certain promises made to our chiefs.”

The event took months of planning and La Ronge band chief Tammy Cook-Searson says the three First Nations worked together to ensure it was a success.

“It was about a year of planning to make today special,” she says. “I think it’s really important for us to celebrate and come together and the other relationships we’ve built and within our communities. It’s about reconciliation and the invitation going out to everybody to come and join us today.”

The festivities had to be moved from Molanosa grounds to the Montreal Lake gym because of the weather.