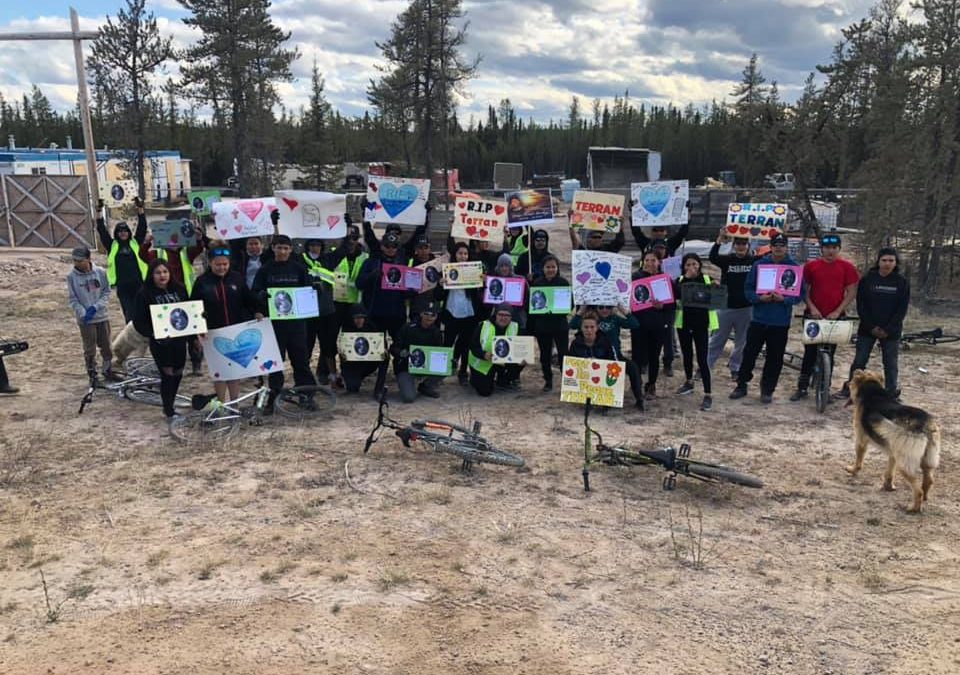 Around 50 youth in Black Lake will be spending their summer break on a one-month bicycle journey.

The trip will commence in Black Lake on June 21 and the group will cycle to Lac Ste. Anne, AB, which is about 80 kilometres northwest of Edmonton.

The 1,600-kilometre excursion is to raise awareness for suicide prevention in the Athabasca region.

Suicide and self-inflicted injuries are the leading causes of death amongst First Nations youth — the highest being young males between the ages of 15 to 24, suggests a study done for the Centre for Suicide Prevention.

Since smaller communities are often so tight-knit, there tends to be a ripple effect after a suicide that powerfully impacts the entire community.

“It’s also to promote a healthy lifestyle and bring youth together in a cheerful environment and to use teamwork,” said organizer, Doreen Toutsaint.

She says that about 150 youth have signed up, but the cycling group will be selected based on attendance in training, which is estimated to be around 50 youth.

They are training from between 5-10 p.m. daily and started cycling five-kilometres, but the youth started asking for more of a challenge, and now they are practicing 15 kilometres.

She says she is pleased to have such an eager team who is already pushing its limits only two weeks into training. She joked that the organizers have to get to work in the morning and the youth are keeping them out all night.

“There has been a big change with their lifestyle,” says Toutsaint. “They have built more and more friendships with each other. They are keeping away from alcohol and drugs. They have been getting into activities and getting along.”

Trauma from assimilation and colonization can be passed down from generation to generation. The Centre for Suicide Prevention study suggests that as the traditional ways of living were almost completely abolished, it impacted healthy ways of healing, such as smudging, sweat lodges and healing circles.

Instead, the effects of the historical trauma have shown depression and mental health issues, sometimes leading to suicide, loneliness and abuse of drugs and alcohol in many generations.

Toutsaint says the youth in Black Lake prefer to hang out together at the recreation centre and get involved in sports and other community-based programming.

A sea of yellow safety vest-clad youth takes to the seasonal road for the training sessions.

“We go up the hill to this big cross,” says Toutsaint. “All the group will go there and gather and go back down and say a prayer, talk in a group and share about how the day was.”

Afterwards, they share a meal in the community kitchen at the recreation centre.

“It’s about keeping positive and aiming for a brighter future for our youth and our community. It’s to build self-esteem and to strive and succeed,” explains Toutsaint.

Earlier this month, a 13-year-old boy from Fond-du-Lac took his own life, leaving community members urging leaders in the Athabasca region to take advantage of the counselling and suicide prevention programs that are available. Some people are calling it an epidemic, suggesting that young people need a lot of help.

Fond-du-Lac is also hosting a suicide prevention bike-a-thon that is slated to leave Fond-du-Lac on June 20 and also make their way to Lac Ste. Anne. About 30 youth from the ages of 12 to 18 will take the challenge.

“I’m trying to get the youths together to let them know that there is hope out there,” said Fond-du-Lac band councillor, Jake Mercredi. “This is the reason that kids are biking, so they can send a message to the other youth out there.”