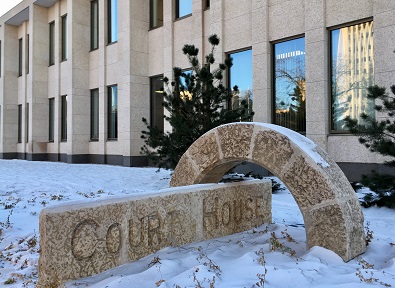 The lawyer for a man convicted of killing four people and injuring seven others in a shooting spree in La Loche three years ago says his client does not deserve an adult sentence.

The now 21-year-old man was just shy of his 18th birthday at the time of the shooting in January 2016 but has been sentenced as an adult to life in a federal penitentiary with no eligibility for parole for 10 years.

Defense attorney Aaron Fox says his client does not have the cognitive maturity to be sentenced as an adult, suggesting a youth criminal justice facility would allow him to get the treatment he needs.

Fox told a Regina appeals court Thursday the shooter has an IQ of 68 and cognitive and comprehension difficulties.

He describes his client as a loner who rarely speaks to people.

Fox says teachers expressed concern with the man’s mental abilities beginning in the first grade and were unable to connect with him.

He adds an adult sentence suggests a mental maturity to understand the acts undertaken but the shooter’s plan was poorly conceived and unsophisticated.

“He put out a Facebook message of what he was going to do and what he had already done,” Fox told reporters following the appeal hearing. “There was no effort to disguise, there was no effort to escape and there was no plan to escape. He was confronted with a situation and reacted wrong to it. I just don’t know how you can possibly describe this as a sophisticated plan.”

Yet, Crown attorney Bev Klatt says the trial judge did take into consideration the man’s low IQ and the fact he suffers from fetal alcohol spectrum disorder.

Nevertheless, to suggest the attack was unsophisticated is not supported by evidence, Klatt says.

She told the appeals court that the man changed weapons to a shotgun after the rifle he had jammed and drove to the school to survey where the largest groups were before retrieving his weapon and opening fire.

“All of the planning and deliberation and execution of his plan that was demonstrated by the evidence did not support a finding that he has diminished blameworthiness,” Klatt says. “And that was the legal question that the judge had to answer. And the attorney general’s position is that she answered it correctly.”

Klatt adds the incident did not stop once Dayne Fontaine was killed and the shooter lured his brother Draydon in before killing him also.

He then posted about the shootings on Facebook and proceeded to the school to continue killing.

The Mayor of La Loche was in court for the appeal hearing and says the long-and drawn out process is affecting the community negatively.

“It’s unfortunate that we have to go relive and be repetitive in the courtroom, now in front of different people,” Robert St. Pierre says. “The community wants to move forward; the community wants to heal. When we go through these processes, the victims get re-victimized.

We have those who have been directly affected, like there are victims still living with the consequences of that day. They still have their medical conditions, still got the emotional and mental that we continuously have to relive. It doesn’t help.”

St. Pierre says he agrees the adult sentence should not be changed and the community is safer with the shooter incarcerated.

Charlene Klyne also agrees the adult sentence should be upheld.

Klyne was working as a substitute teacher at La Loche Dene High School when the incident took place and was severely injured after being shot in the face.

She has lost most of her eyesight as a result.

Klyne says the shooter was mentally capable of researching, planning and executing the heinous crimes and should pay the price.

Like St. Pierre, she says she worries about what could happen if he is let back out on the street.

“Enough is enough,” Klyne says. “They need to let him be sentenced as the judge found fit and she said if he got out he would more than likely reoffend and I agree.”

The Regina Court of Appeal has reserved its decision for a later date.

With files by Fraser Needham.