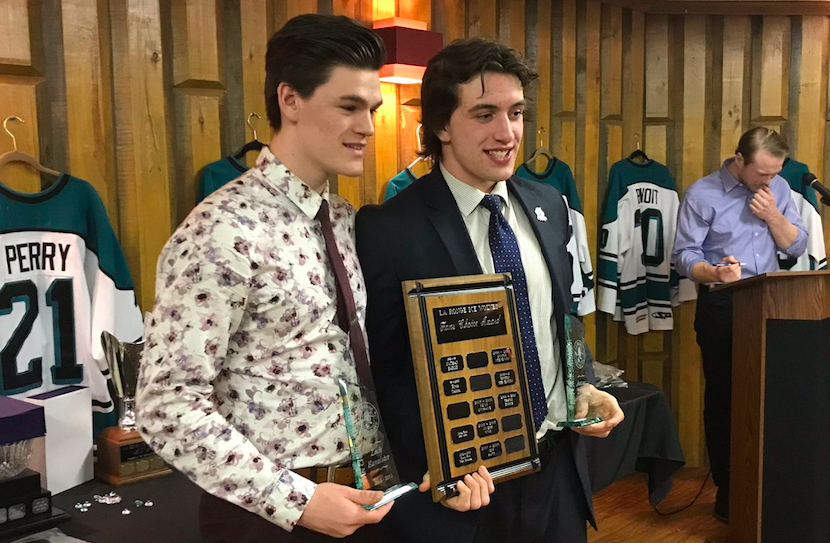 The La Ronge Ice Wolves put a bow on their season when they hosted their year-end awards banquet at Eagle Point Resort Friday night.

“It’s obviously a great feeling, but I can’t take too much of the credit,” said Bannister. “I would not be able to do that without the staff we have, the billets, everybody that helps the organization. Lastly, my teammates — they push me every single day and try to make me become a better me and a better player.”

Forward Jake Gudjonson also picked up a lot of hardware. Gudjonson took home the diamond in the rough award and Mr. Hustle trophy.

“I can’t thank the boys enough that I played with, all the guys that I’ve had the pleasure to play with all year, they’ve helped me out so much to achieve the goals that I had coming into the season,” said Gudjonson. “Couldn’t ask for a better group of guys and all the awards that were given out tonight, all the boys deserved it.”

The rookie of the year honours belong to defenceman Dylan Thackeray, who ended the season with 17 points in 51 games.

“It feels pretty good, wasn’t too sure going into this, just happy to come out with an award,” said Thackeray.

Forward Dalton Dosko was named most sportsmanlike, while the most improved prize was split between defencemen Grant Longtin and Kevin Fillier.

Meantime, a highlight of the evening was the annual jersey auction. Thousands of dollars was raised for the team. The top-selling jersey was Jordan Frey’s, which sold for $1,200.