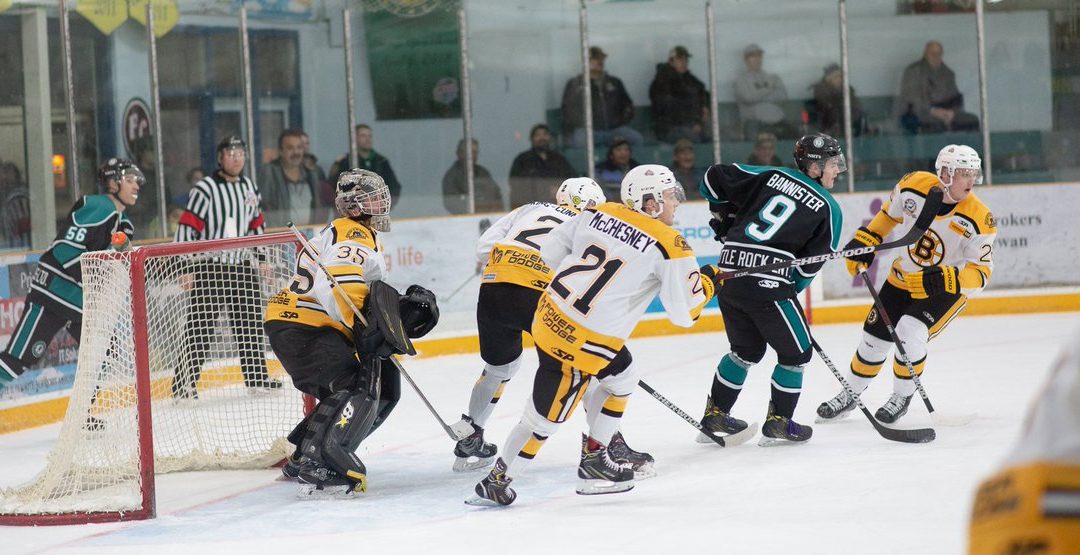 The 19-year-old Grande Prairie, AB product has tallied 59 points in 49 games, which has him in 10th in SJHL scoring.

Bannister etched his name into the history books last Saturday in Nipawin when he recorded his 58th point of the season, becoming the first Ice Wolf to do so since three players reached the 58-point plateau during the 2010-11 campaign.

“That means a lot — after seeing that stat and everything, it’s nice, it’s a good feeling,” said Bannister. “I just got to keep pushing and looking forward to what’s ahead.”

What’s ahead for Bannister will hopefully be an NCAA Division 1 scholarship, something he’s had his sights set on for quite some time.

“It’s always been a dream of mine since I was a little kid to pursue my hockey to the Division 1 level and get an education at a school down in the States at that calibre,” said Bannister. “Just going to keep working for it and hopefully it comes around.”

“Zach is an emotional player, so he gets fired up and I think that rubs off on a lot of the guys too,” said Ice Wolves Head Coach and GM Evan Vossen.

“Obviously, you talked about his offensive ability, but him being emotional and when he is that way, he’s got some fire and some passion. I think some of the guys have been able to build off that as well too. Whether he knows that or not, I think that’s something that from a leadership standpoint, he definitely brings to our team.”

Bannister and the Ice Wolves are back in action on Friday night at home when they host the Humboldt Broncos at the Mel Hegland Uniplex.

Friday’s game marks the return of former Ice Wolf Mitch Zambon to the Mel Hegland Uniplex. The Ice Wolves and Broncos will also meet Saturday in La Ronge. Both games are scheduled to get underway at 7:30 p.m.