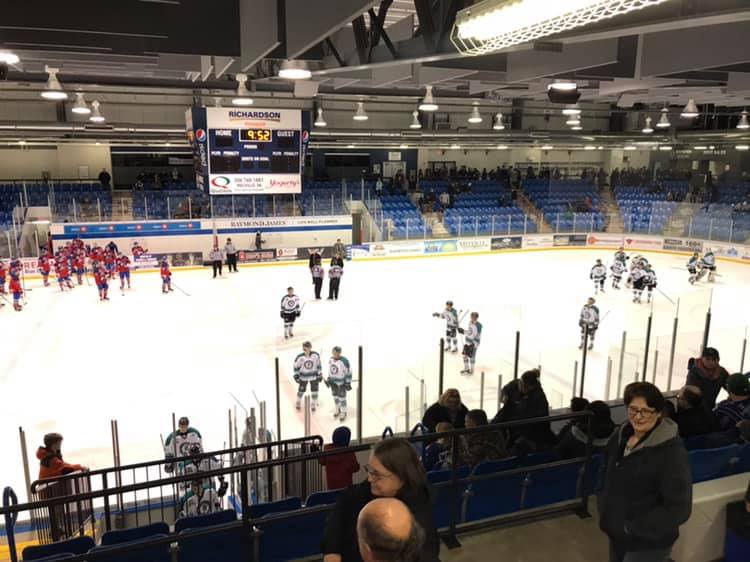 Just a couple days after an organizational shakeup, the La Ronge Ice Wolves ended a 14-game slide with a 3-2 shootout victory on Friday night in Melville versus the Millionaires.

“With everything that’s been going on, it’s been a very confusing time for these guys,” said La Ronge Ice Wolves Interim Head Coach Gaelan Patterson. “They just cleared it (their minds), you could tell that they were all pulling the same rope — that’s what happened, it was awesome to see.”

La Ronge opened the scoring 3:25 into the first frame on the power play when Zach Bannister beat Colby Entz upstairs for his 26th of the season. Despite only scoring once, Bannister could have had three goals, as the Grande Prairie, AB product also rattled the iron twice.

The Ice Wolves took a 2-0 lead 4:53 into the second on the man advantage when Daunte Fortner drove the net and beat Entz for his seventh of the campaign. The Millionaires cut the lead to one 6:35 into the second on the power play when Max McPeak scored. McPeak evened the game at two 15:14 into the middle stanza when he beat Frey upstairs on a penalty shot.

The third period and overtime frame solved nothing, so La Ronge and Melville needed a shootout Friday evening. Jordan Frey was perfect in the shootout and Jake Gudjonson scored the only goal of the shootout, as the Ice Wolves earned the extra point Friday.

“We played really good defensively tonight and in the third period, both teams were playing well defensively,” said La Ronge Ice Wolves goalie, Jordan Frey, who made 35 saves in the win. “Nice to come out of this game on the right side of the board and we’ve had a couple tough losses in the last 14 games, but nice to get rewarded here tonight.”

With the win, the Ice Wolves improved to 11-42-1-1 on the season. The Ice Wolves will look for their second straight victory Saturday in Wilcox when they meet the Notre Dame Hounds for the final time this season. Saturday’s game gets underway at 7 p.m. from Wilcox.

Meantime, Mike Zambon joined Gaelan Patterson and Terry “Moose” Hunt on the bench on Friday night. It’s expected that Zambon will be on the bench for the rest of the season in an assistant coach role.

(PHOTO: The Ice Wolves skated out of Melville with two points Friday. Photo by Braden Malsbury.)