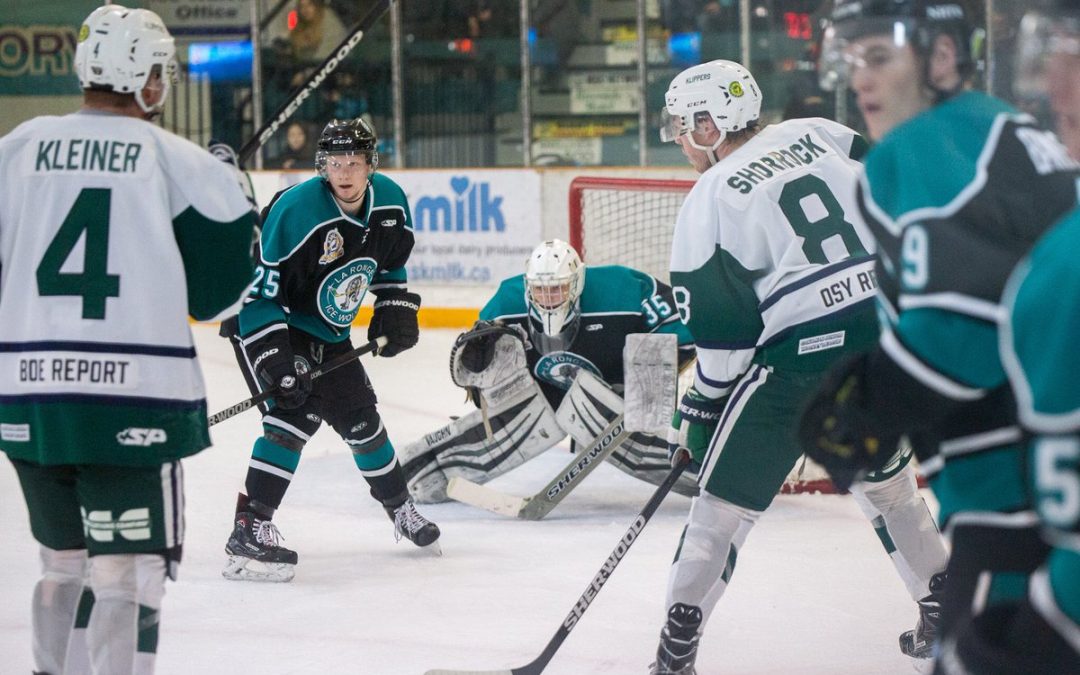 The La Ronge Ice Wolves closed out their weekend with a 5-2 setback at home Saturday versus the Kindersley Klippers.

“Real happy with tonight and the weekend — from the effort level for the guys,” said Ice Wolves Head Coach and GM Evan Vossen.

“There’s two tough hops in the second period, within about a minute of each other that you know, just the way things have been going. Just another two-minute lapse with a couple mental errors in the last part of the period. Other than that, I thought the first and third, we definitely controlled the play.”

Just like on Friday, the Ice Wolves found the back of the net first. Stewart Pond notched his second of the season in the slot 10:29 into the game when he wired the puck past a sprawling Justen Close, who appeared to lose his balance and fall over.

The Klippers would tie things up at one 11:04 into the stanza when Brett Neumeier found the puck in the crease and beat Jordan Frey on the ice. Frey made his third straight start and ended the evening with 37 saves in a losing cause.

The Ice Wolves restored the lead 21 seconds into the second when Antonio Di Paolo picked up a rebound and beat Close in tight for his eighth of the season, which put La Ronge up 2-1.

“Since coming back from Christmas break and with the bodies and personnel we’ve moved kind of in and out, I think we’ve got to be really happy with where we’ve been,” said Ice Wolves defenceman Antonio Di Paolo.

“Three-and-three (record) since coming back from Christmas, we’re happy with that, but not satisfied. This team has showed that, you know those wins are going to keep coming if we keep bringing that effort that we brought tonight.”

With the loss, the Ice Wolves slipped to 10-30-1 on the season, which has them in last in the overall standings and 11 points behind Melville for the final playoff spot.

The Ice Wolves will be looking to rebound next Friday at home when they host the Nipawin Hawks in game one of a weekend series. The Ice Wolves are on the road next Saturday in Nipawin. You can catch Saturday’s contest on MBC Network Radio with Braden Malsbury.

(PHOTO: The Ice Wolves closed out the season series with Kindersley Saturday. Photo by David Smith.)