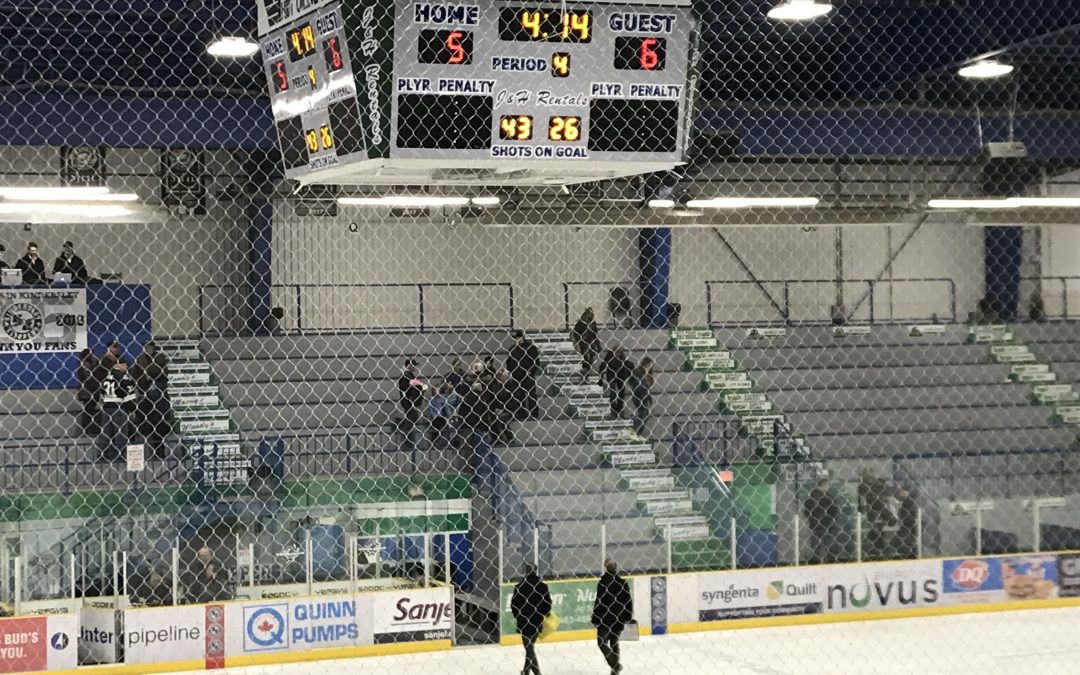 It was not a Picasso, but the La Ronge Ice Wolves grinded out a 6-5 overtime win on Friday night in Kindersley versus the Klippers.

Following a 60-minute track meet, the Ice Wolves ended things 46 seconds into the extra session when Zach Bannister wired home a rocket upstairs for his 19th of the season.

“I stretched out, got a stretch pass and Misher (Jordan Mish) was driving the net – tried hitting him and it bounced off a stick right back to me and just lucky enough to have the open net and put it upstairs,” said Bannister.

The Ice Wolves got off to a blistering start Friday and led 2-0 before the game was nine minutes old. Dylan Thackeray opened the scoring 7:23 into the first on the power play when he sent shot from the point past Justen Close. Affiliated player Holden Knights fired a harmless looking shot by Close under a minute later. Kindersley’s Kyle Bosch cut the lead to one, but La Ronge restored the two-goal lead 14:45 into the first on the man advantage when Steph Perreault sent a seeing-eye wrister past Close for his fourth of the campaign. Following the Perreault marker, Close was yanked and Zach Johnson came into the game. Close allowed three goals on five shots, while Johnson ended the night with 19 saves.

The Klippers had a strong second frame and led 4-3 after 40 minutes following two more goals from Kyle Bosch and a single marker from Ty Enns. La Ronge was outshot 18-7 in the frame, but Daniel Davidson made several timely stops to keep La Ronge in it. Davidson would end the evening with 38 saves for his fourth win of the season.

The Ice Wolves looked like motivated club in the third. They started the frame on the power play and Jordan Mish tipped home an Antonio Di Paolo offering from the point 1:09 into the stanza, which tied the game at four. The excitement was short-lived, as Brett Neumeier wired a shot home from a weird angle on the right side 5:01 into the period that propelled the Klippers ahead 5-4. With time winding down, the Ice Wolves capitalized on the power play for the fourth time Friday 18:19 into the third when Stewart Pond tipped home his first SJHL goal, which sent the contest to overtime.

With the win, the Ice Wolves improved to 9-28-1-0 on the season, which still has them in last in the overall standings. Following Friday’s SJHL action, the Ice Wolves are 12 points behind Melville for the final playoff spot last the moment.

La Ronge will look for its second straight win on Saturday in Kindersley when they close out their weekend versus the Klippers. You can catch the action live on MBC Network Radio with Braden Malsbury, the pre-game show begins at 7:15 p.m.

(PHOTO: The Ice Wolves made their second trip of the season to Kindersley Friday. Photo by Braden Malsbury.)