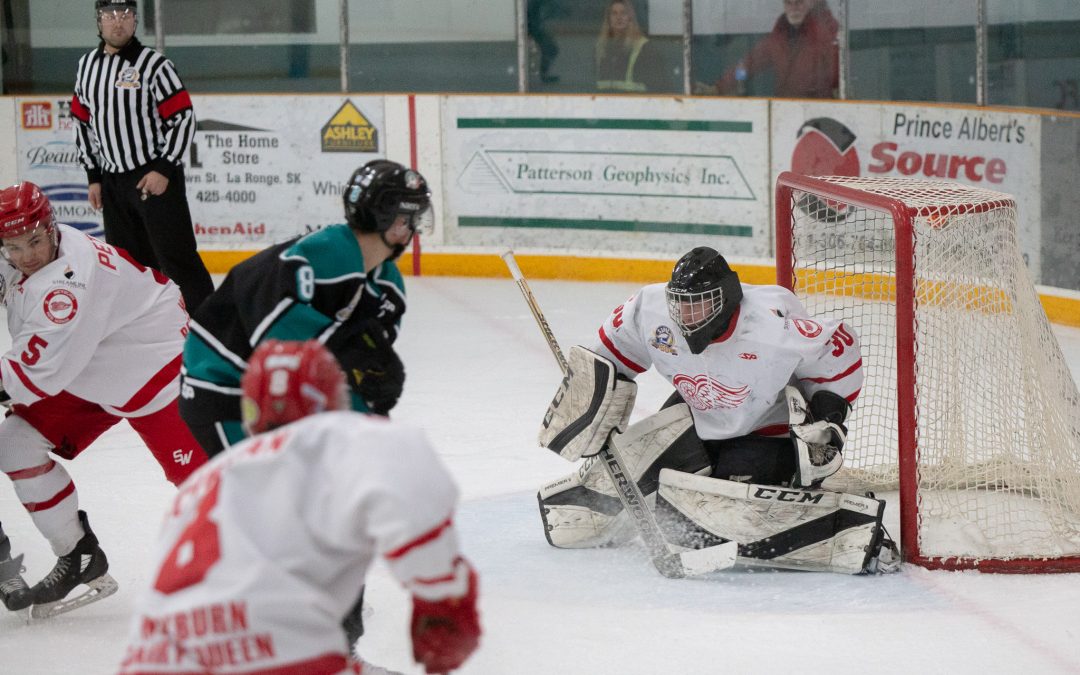 The La Ronge Ice Wolves dropped their 13th straight game on Friday night when they came up short 1-0 at home to the Weyburn Red Wings.

It appeared the Ice Wolves and Red Wings were heading to overtime scoreless, but the Wings had other ideas. With only 53 seconds left in the third, La Ronge’s Ben Manson was charged with interference.

The Wings would convert on the power play with just 14 seconds remaining in the third when Carson Scheschuk fired home his eighth of the season in the slot past Daniel Davidson.

“I was really happy with the effort the guys gave tonight,” said Ice Wolves Head Coach and GM Evan Vossen.

It was a goaltending battle on Friday night at the Mel Hegland Uniplex. Daniel Davidson made 30 saves in a losing cause, while Riley Lamb turned away 33 shots for his third shutout of the season.

Weyburn’s Zac Gladu made his return to the Mel on Friday. Gladu spent parts of two seasons with the Ice Wolves.

“It was nice, it was good to be back — obviously, saw some people, some familiar faces,” said Gladu. “I think we executed 60 minutes of hockey tonight, like we haven’t done in the past, the past two games for sure. I think this was the best game of our road trip thus far.”

With the loss, the Ice Wolves went 0-11 through November. La Ronge is currently at the basement of the SJHL with its 6-24 record. The Ice Wolves last win came Oct. 26 at home against the Estevan Bruins. La Ronge sits 10 points behind Weyburn for the final playoff spot at the moment.

Meanwhile, Saturday marks roster cutdown day for teams in the CJHL. Teams have to trim their rosters down to 25 players.

“There will be a lot of phone calls and things like that tomorrow, just because of the day it is,” said Vossen. “Roster-wise, I guess we will see how things play out.”

The Ice Wolves are back in action on Tuesday night when they host the Kindersley Klippers at the Mel. Tuesday’s game gets underway at 7:30 p.m.