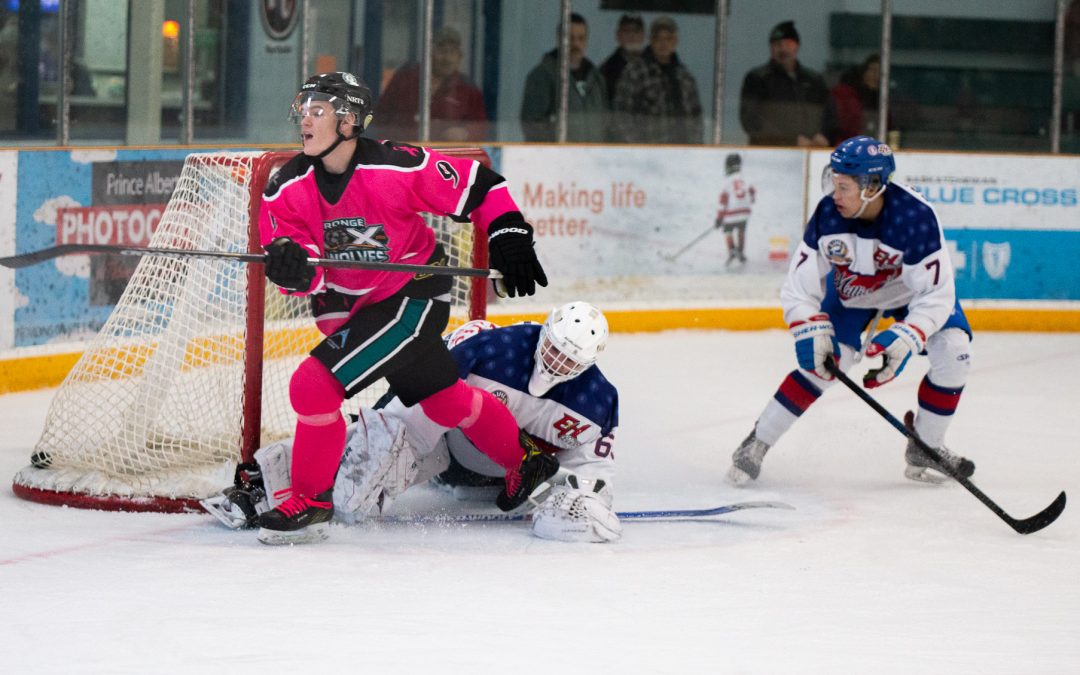 The La Ronge Ice Wolves lost their 11th straight game on Friday — this time it was a 6-4 setback at the Mel Hegland Uniplex to the Melville Millionaires.

“I think overall, for the most part, our game was pretty solid,” said Ice Wolves Head Coach and GM Evan Vossen. “I thought we dictated the pace for most of it.”

The Ice Wolves went into the third trailing Melville 3-1. La Ronge could have folded up its tent, but the Wolves kept grinding away and eventually tied the game at three after goals from Antonio Di Paolo and Tyler Johnson under seven minutes into the frame. For Johnson, it was his first SJHL goal.

The tied game was short-lived though. Just over two minutes after the Johnson marker, Josh Borynec tallied his first of the evening, which restored the lead for the Millionaires. Melville took a 5-3 advantage 15:33 into the the third when Borynec scored his second of the night and sixth of the season.

Zach Bannister would make things interesting 17:04 into the third when he recorded his second of the evening and 14th of the season, which made a 5-4 game, but La Ronge was not able to score a fifth goal. Melville put the icing on the cake with a late empty-netter when Tristan Shewchuk sent home his second of the night.

With just 49 seconds left in the game, Ice Wolves forward Jordan Mish took a hit from Cory Schillo that resulted in Mish being taken off the ice on a stretcher. Schillo was handed a five-minute major for boarding

“While he (Mish) was at the bench there, getting him loaded up, he was able to move his feet and extremities,” said Vossen when asked about the condition of Mish shortly after the game.

Despite the loss, the Ice Wolves outshot Melville 36-28 on Friday night. La Ronge goaltender Daniel Davidson was hung out to dry on several occasions, he ended the night with 23 saves. Colby Entz recorded the win in the Melville net with a 32-save performance.

With the loss, the Ice Wolves slipped to 6-22 on the season, which has them in last place in the overall standings. La Ronge is now eight points back of Melville for the last playoff spot in the SJHL.

The Ice Wolves will be looking to bounce back and return to the win column on Wednesday when they welcome the Estevan Bruins to town for a 7:30 p.m. puck drop. The Ice Wolves are 2-1 versus the Bruins this season.