Report into deadly Sask. Pen. riot was due to lack of compromise 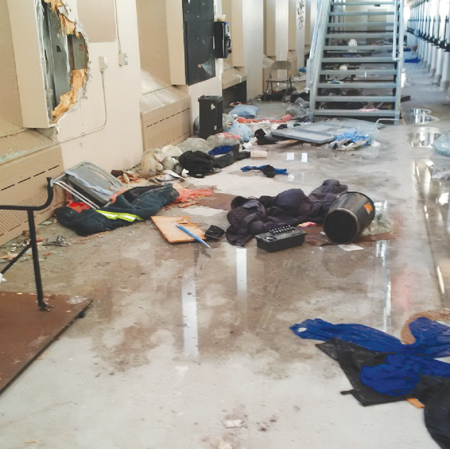 A federal report into the deadly riot at the Saskatchewan Penitentiary in Prince Albert in December 2016, found it was not caused by inmate frustrations over food quantity and working conditions, but rather a lack of compromise from management and inmates.

“The Sask. Pen. riot was not just about the kitchen situation, food shortages or even inmates who were fed up (as it were) and desperate enough to violently take matters into their own hands. As the food and work protest became more and more protracted and both sides more entrenched, there was a critical breakdown in the ability to reach compromise. At key points in the negotiations, inmate representatives meeting with Management did not seem to have the necessary backing or support of general population ranges to compromise or accept concessions. In this case, the usual channels of inmate representation and communication with management did not appear to work optimally, perhaps best illustrated by the Warden electing to hold a private meeting with one of the Inmate Welfare Committee members on the morning of the riot, ostensibly to get a better sense of who was behind the work stoppage and why his concessions on kitchen issues had been refused by the population.”

The riot resulted in the death of one inmate and the serious assault of two others. All three were Indigenous.

“Though the riot took place in the medium security sector of Sask. Pen., it was primarily confined to five ranges (E1&2, E3&4 and F4) in two different general population units (1 and 4). There were 131 of 475 (27%) medium security inmates involved or implicated in the riot. Of significance and relevance, these units were “integrated” ranges which housed a significantly higher concentration of gang-affiliated inmates. These units also housed a markedly higher proportion of Indigenous inmates than the rest of the medium security sector. In fact, on the day of the incident, 85% of the 131 inmates living on these ranges were of Indigenous ancestry (compared to 62% for the rest of the medium security population).”

The report notes that inmates were frustrated over meal portions, quality and shortages, but that management tried to address the situation.

“Inmate concerns related to food quality, food shortages and meal portion sizes. For example, menus were shared with the inmates, food scales were made available to weigh meals, sample meals were displayed at the front of the serving line and inmate food quality advisors were hired. Despite these measures, inmates continued to bring forward both individual and group complaints, particularly involving protein allotment and meal portion sizes. By all accounts, some of the disputes between inmate food services workers and management could get quite heated over meal portion size. Indeed, the inmate kitchen workers walked off the job on the morning of Friday December 9, reportedly in protest of the scrambled egg portion size served at the breakfast meal.”

The report concludes that the riot was spontaneous with no pre-incident indicators and that the riot could not have been predicted.