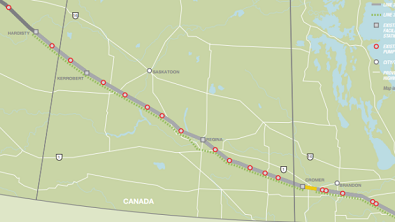 The current pipeline is decommissioned and a new line is being constructed. The pipeline carries oil from Hardesy, Alberta to Superior, Wisconsin and passes by the George Gordon First Nation, which is about an hour north of Regina.

They have held one community meeting so far, but Councilor Glen Pratt says more meetings will need to take place for the community to really understand what the pipeline project means for them.

A top priority is ensuring the environment is protected. “An impact would be more less in our traditional area and what kind of impact it may have on Mother Nature as a whole; whether it be the land, water, the animals, the plants,” said Pratt.

Construction began in the summer of 2017 and the program made its way into Saskatchewan this past August.

About 7000 jobs have been created through the project and Pratt is optimistic that Line 3 is good for the local economy, as long as the environment is protected during the process.