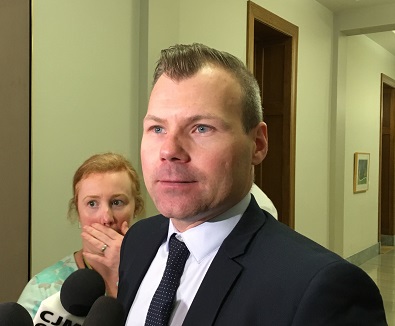 The Saskatchewan government is holding firm on its decision to arm conservation officers with semi-automatic rifles.

Officers are already armed with a handgun and shotgun but the government claims they need the increased firepower because they face “potentially dangerous situations” on a regular basis.

Dustin Duncan is the minister of environment.

“Our conservation officers deal largely in remote areas, often without available backup in timely fashion,” he says. “They mainly deal with individuals that are armed and sometimes heavily armed.”

However, NDP Leader Ryan Meili says the move will likely increase tensions between authorities and Indigenous hunters and could even result in fatalities.

“One of the big concerns is when there could be potential conflicts around hunting and treaty rights that this might result in conflict that could result to the level of fatality,” he says.

Earlier in the week, the Federation of Sovereign Indigenous Nations expressed its own concerns about the government decision and frustration it was not consulted.

The FSIN says arming conservation officers with high powered weapons only heightens tensions between Indigenous people and authorities in rural Saskatchewan and relations are already strained following the death of 22-year-old Colten Boushie of the Red Pheasant First Nation and acquittal of his killer farmer Gerald Stanley.

Like Meili, Vice-Chief Heather Bear says providing the weapons to conservation officers could increase deaths rather than preventing them.

Duncan says conservation officers will be thoroughly trained on how to use the guns and are already highly trained in de-escalation techniques.

He adds the reason the FSIN was not consulted is because it is an operational decision.

Duncan also says he takes issue with the implication that providing the arms to officers could increase deaths.

“I think for anybody to suggest that any member of any community in this province is at greater risk because our conservation officers are now being deployed with the appropriate level of firearms, I just don’t think we need that type of commentary in the province.”

However, thus far, neither the minister nor assistant deputy minister of environment Kevin Murphy has been able to say exactly why conservation officers do need the high-high powered weapons.

Both continue to cite a court decision in relation to the deaths of four Mounties in Moncton, New Brunswick at the hands of Justin Bourque in 2014.

The ruling says the RCMP failed to properly equip the officers.

Yet, how exactly this applies to conservation officers serving in Saskatchewan remains unclear.

In fact, environment officials say officers have never discharged a weapon in an incident that involves the public.

Environment is currently taking proposals to provide the weapons for the department and has plans to buy as many as 147.

In an emailed statement, the government says the Ministry of Environment will be supplying patrol rifles and body armour to its conservation officers and is currently in the tendering process.

The statement goes on to say directly, “The ministry is currently going through the tendering process, so the final cost won’t be known until the tender is awarded. To protect the integrity of the procurement process, we cannot provide any information on the budget or projected costs.”