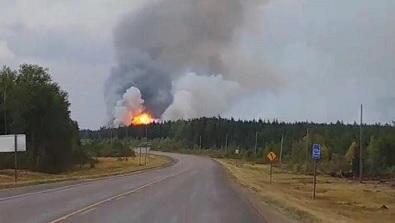 Saskatchewan Environment has introduced changes for the coming wildfire season.

It is one of the findings in an interim report put together by the Prince Albert Grand Council’s Wildfire Task Force.

The task force was formed “to provide an independent review of Saskatchewan’s current wildfire management strategies” following a 2017 fire season that saw several Peter Ballantyne Cree Nation communities evacuated because of a series of wildfires in the late summer.

In a joint release with the Saskatchewan government, the task force says the changes for the 2018 fire season include increasing the emergency firefighter crew size from five to eight, training more crew leaders to increase capacity to deploy firefighters and enhanced funding for fuel mitigation projects near communities.

The release also says that the use of the 20-km community response zone, “often misrepresented as the ‘Let It Burn’ policy, was already discontinued following the review of the 2015 wildfire season.”

The task force notes there were 353 wildfires in 2017 and “the areas of burnt land have had an impact on the treaty rights of northern First Nations to hunt, trap, fish and gather foods.”

The task force says it identified several areas for action and recommendations, including:

“It is important to develop joint solutions and strategies for northern food security reasons,” said PAGC Vice Chief Joseph Tsannie in the release. “The increasing rate of wildfires destroys caribou feeding grounds, which impact the ability of our hunters to access their main food for survival, especially in Athabasca communities where food prices are extremely high.”

Steve Roberts, Executive Director of Wildfire Management, says the plan is to have more personnel fighting fires when needed. “There were issues with few crew leaders and lots of firefighters. So, when they needed those crews, they could only make so many because they only had so many crew leaders. By changing the configuration, they will be able to put more people on the fire line when we request them,” Roberts said. “Exclusion of fire is not the task. The idea is to manage fires, so it does cause a threat, an evacuation and burn up critical infrastructure.”

The task force is comprised of First Nations elders, leaders and technicians from across northern Saskatchewan, and includes Federation of Sovereign Indigenous Nations representation.

The full report can be found at https://www.pagc.sk.ca/health/programs-and-services/emergency-preparedness/.

(A wildfire burns near the junction of Highways 106 and 135 in the late summer of 2017. Photo courtesy of Saskatchewan Department of Highways)