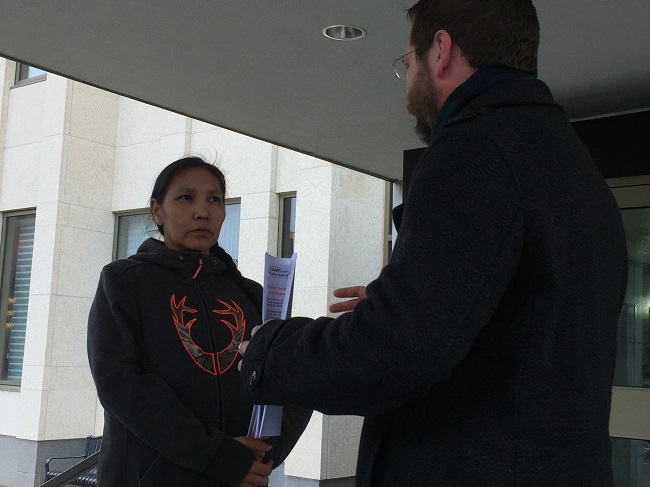 After going to court and winning multiple times for the release of financial documents of the Onion Lake Cree Nation, band member Charmaine Stick stood on the steps of the Regina courthouse Monday clutching a white binder of financial information.

Stick says it was hurtful to examine the basic financials, given the needs for improved health, social services and housing in the community.

The Canadian Taxpayers Federation assisted in the legal battle. It says documents show Chief Wallace Fox made $123,000 in 2015 and got a raise of approximately $28,000 a year later. Yet, the national average for a chief’s salary was nearly $60,000.

Stick says seeing the high wage for Chief Fox, she can understand why the First Nation did not want to disclose the band’s financials, but questions the level of pay.

“Our leadership is taking the whole pie, while leaving us the crumbs,” said Stick. “It just doesn’t make any sense on so many levels.”

The CTF says the documents also show two failed technology investments worth a combined $1.4 million, devalued to one dollar each. The CTF says while no reasons are specified for the nature of failed investments, it suspects the decision is related to investing into a troubled New Zealand tech company.

Stick and the CTF say that the Onion Lake Cree Nation leadership will have to explain their expenditures with Stick, saying that transparency will be good for the First Nation.

“In the end, this is going to be something good for our children’s future, and for all future generations,” Stick said.

A call to Chief Fox requesting comment has not been returned, but the First Nation did make a statement through a press release.

“Rather than attempt any further appeal of the order already made by the Saskatchewan courts, Onion Lake has decided to focus on its legal challenge to the constitutionality of the FNFTA [First Nations Financial Transparency Act], and to the conduct of the Crown, in the federal court.”