La Loche, La Ronge and Meadow Lake to each get one marijuana retailer 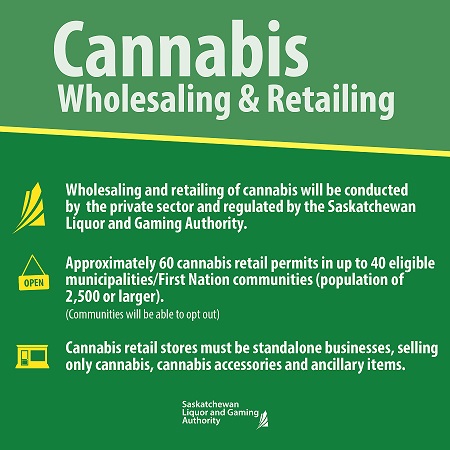 The Saskatchewan Liquor and Gaming Authority says it received more than 1,500 submissions for cannabis retail permits and that it is still in the process of selecting the 51 cannabis retailers in 32 communities.

The communities of La Loche, Meadow Lake and La Ronge are eligible for one permit each, yet those communities saw a combined 77 applications.

Gene Makowsky, Minister for the Saskatchewan Liquor and Gaming Authority says those First Nations have to decide on whether to accept the cannabis licenses. “We’ve had conversations initially with those three, [First Nations] but at this point they’re not ready to proceed,” Makowsky said.

At least one First Nation wants more Indigenous involvement. Darin Poorman, the director of operations for the Kawacatoose First Nation, pointed to the federal government’s desire of one third involvement for First Nations in the cannabis industry as a good starting ground for Aboriginal involvement.

Poorman says there is a lot of push from several individual First Nations to sit down with the province to hopefully get more licences for their communities.

“Regardless on how we see this industry as First Nation people, this is going to become legal very soon, so we have to make sure we are at the table because we have been left out too many times in the past,” Poorman said. “We have been given this opportunity by the federal government, but the province seems to be pushing us out.”

Makowsky says the government at this point is not willing to grant additional licenses. He says more permits may be issued, depending on future public demand and response. “We’ll have those conversations and see where the market is and what the response is,” said Makowsky.

However, the SLGA says the number of licences each community receives is based on population of at least 2,500.

SLGA Vice President of Corporate Services and Gaming Operations, Jim Engel, says that is why only three First Nations have been selected. Engel says further consultation with First Nations and communities is expected.

(PHOTO: Infographic on marijuana sales. Photo courtesy of the Government of Saskatchewan.)