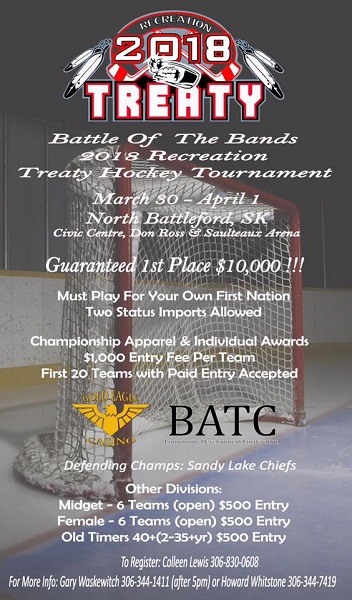 The Battle of the Bands Aboriginal Hockey Tournament kicks off in North Battleford Friday.

It’s expected 18 teams will compete for the $10,000 up for grabs in the recreation division. Officials are expecting some fairly well-known players to take part.

“I’ve got a guy by the name of Kirk Bear that’s going to be playing, Sterling Bear – they played in the SJ,” said Grant Whitstone, an organizer with the tournament. “Guys like Aaron Starr and couple of other kids coming out from Alberta. For example, Trygve Many Guns, he played in OCN (MJHL) this year.”

This year’s tournament will feature recreation, old-timer, midget and female divisions. With the Native Stanley Cup Tournament no longer in operation, the Battle of the Bands is one of the bigger tournaments according to Whitstone.

“No disrespect to the Native Stanley Cup, that was one of the best tournaments ever in Saskatchewan, actually in Western Canada,” said Whitstone. “The Battle of Bands followed that suit, and like I said, we want to highlight the First Nations players and First Nations teams.”

Action will take place at the North Battleford Civic Centre, Don Ross Arena and Saulteaux Arena. The tournament will come to a close on Sunday.