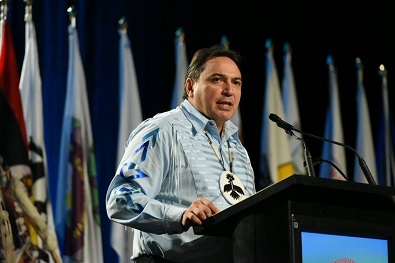 Late Thursday afternoon, a jury found Raymond Cormier not guilty of second-degree murder in the death of 15-year-old Tina Fontaine.

Fontaine’s body was pulled from the Red River in Winnipeg in August 2014.

Over the past two weeks, Cormier has been on trial for her death, however, after over a day of deliberations, a jury found him not guilty.

The reaction to the verdict was swift and widespread, with several First Nations organizations claiming the verdict was another example of inequalities for Indigenous people in the justice system.

“With this verdict, we see yet another young First Nations woman failed by the child welfare system, failed by the police and now failed by the courts,” said AFN National Chief, Perry Bellegarde in a media release. “This verdict is a severe setback for justice and reconciliation in this country. Reconciliation cannot be simply about words – it has to be about action, about valuing the lives of Indigenous people, and keeping Indigenous women and girls safe.”

Chief Bellegarde is calling for swift and immediate change to a system that he says continues to fail Indigenous people.

“How much more do these court and justice systems and juries need before the truth comes out?” said FSIN Chief, Bobby Cameron in a media release. “We need this Royal Commission, and we need it now.”

“We don’t need any more pretty speeches by those who are in positions that can effect change,” said FSIN Vice Chief, Kim Jonathan in the same release. “There are major outstanding issues that have been identified and brought forward many times that require immediate action and attention.”

Some legal experts have weighed in on the verdict and say the Crown did not present enough evidence to find Cormier guilty.

The FSIN will be holding a media conference on the verdict at noon on Friday.

Tina Fontaine was from Sagkeeng First Nation in Manitoba.  Several rallies are planned in her honour across the country.

The reaction to this verdict comes just weeks after Saskatchewan farmer Gerald Stanley was found not guilty in the shooting death of 22-year-old Colten Boushie from Red Pheasant First Nation.

That verdict sparked several calls for renewal in the justice system after an all-white jury found Stanley not guilty.