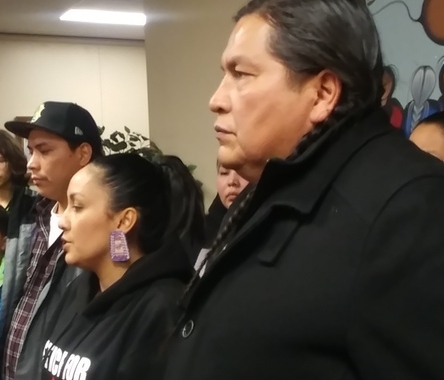 Those were the words from Federation of Sovereign Indigenous Nations Chief Bobby Cameron hours after a jury found Gerald Stanley not guilty in relation to the death of Colten Boushie.

Stanley had been charged in Boushie’s death in 2016. He was acquitted of all charges Friday evening.

The FSIN called a media conference at the Battleford Agency Tribal Chiefs office in North Battleford Late Friday night with members of Colten Boushie’s family and chiefs from nearby reserves.

Many of the speakers called for changes to the justice system and for Indigenous people across the country to not lose their voice. A few of them had harsh criticism for Crown Prosecution lawyer Bill Burge.

“He should never have been appointed,” said FSIN Chief Bobby Cameron.

Sheldon Wuttunee, a former Chief of the Red Pheasant First Nation and a consistent spokesperson for the Boushie family echoed Chief Cameron’s sentiment.

“We had to encourage the crown prosecutor to prosecute and not help the defence,” he told reporters gathered in a tightly packed room. “It was very frustrating.”

Eleanor Sunchild is a legal representative for the Boushie family and she claims they were mistreated right from the get go.

“There was little communication from the Crown to the family,” said Sunchild. “There was no relationship there at all.”

“I hope an inquiry comes from this and we can raise the injustices this family has seen,” she added.

Moving forward FSIN Chief Bobby Cameron says he will continue to confer with the family if they want to officially call for an inquiry into the Stanley trial. Chief Cameron was vocal about his disappointment in the selection of an all white jury and the inability for the family to chose their prosecution lawyer.

“Gerald Stanley has not got away with this yet,” said Cameron. “Somewhere down the line he is going to pay.”

Earlier in the night crown lawyers would not confirm either way if they will appeal the decision.

Several rallys are planned across the country in support of the Boushie family on Saturday with gatherings planned in Saskatoon, Ottawa and Vancouver.

Colten Boushie’s cousin Jade Tootoosis encouraged Indigenous people across the country to be vocal for change.

“We are Indigenous people… we are strong and resilient… we will continue to be be and we don’t have to tolerate these injustices,” she said.