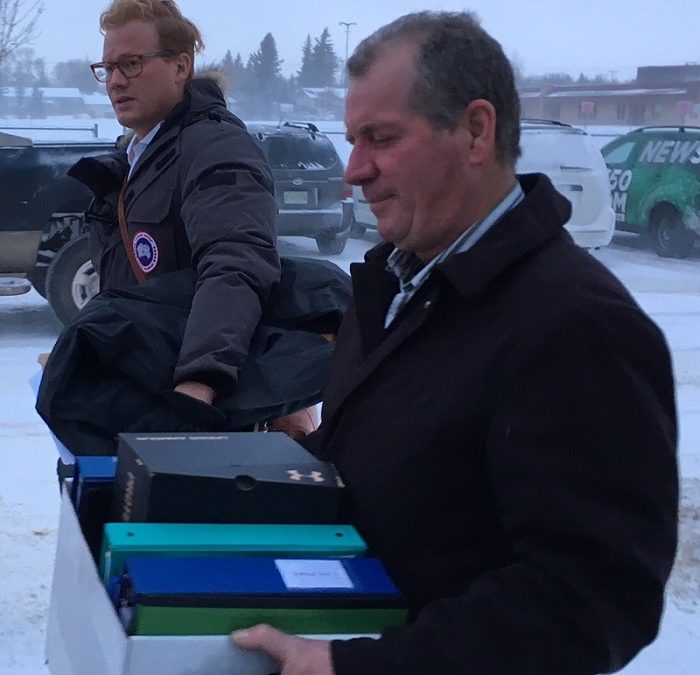 Graphic death scene photos and RCMP expert testimony marked the first day of the trial of a Biggar area farmer accused of shooting a First Nations man to death in August of 2016. A forensic expert and a blood spatter expert were the first two witnesses in the trial that is expected to last two weeks.

56 year old Gerald Stanley was flanked by family friends and friends on one side of the court, while family of Colten Boushie sat on the other, both sides listening intently as the story of what happened and why began to unfold.

Crown prosecutor Bill Burge outlined his case during his opening arguments to the jury. He says a group of people drove onto the Stanley Farm in a battered Ford Escape missing one tire and riding on a rim. There was an attempt by the group to get into a vehicle on the farm as well as start an ATV. The occupants then got back in the SUV and collided with another vehicle on the farm. Burge says Stanley and his son Sheldon tried to intervene. Sheldon ran into the house to get keys in the event a vehicle chase ensued

Burge says Sheldon will tell the court he heard two shots when he ran into the house, then a third shot when he came out and saw his father beside the vehicle and the body of Boushie slumped over the steering wheel. Other photos showed Boushie on the ground laying beside the barrel of a broken 22 calibre rifle.

His uncle Alvin Baptiste says watching the evidence was difficult.

“And I also pity my sister that has to see this….those pictures are pretty graphic to see, my nephew laying there and the blood splatter all over the vehicle like that, you know its reopening all the wounds again,” he said.

“It seems unfair you know, they don’t let First Nations people, you know we also have a view who have a different view of things also and they don’t have a First Nations, Indigenous perspective view of it,” he added.

Two jurors were excused Tuesday morning, one because the roads were impassable, the other because of undue hardships. The trial will continue with 12 jurors and no alternates. Family members of Gerald Stanley, and people who were in the car with Boushie when he was shot will testify later this week. Testimony will continue Wednesday morning with more RCMP members.

There is no indication if Stanley will take the stand in his own defence. That decision will not be made until the last moment. Prosecutors will call only 10 witnesses, they include 4 police officers and 6 civilians. The trial is scheduled to last 3 weeks, but testimony is expected to wrap up by early next week.