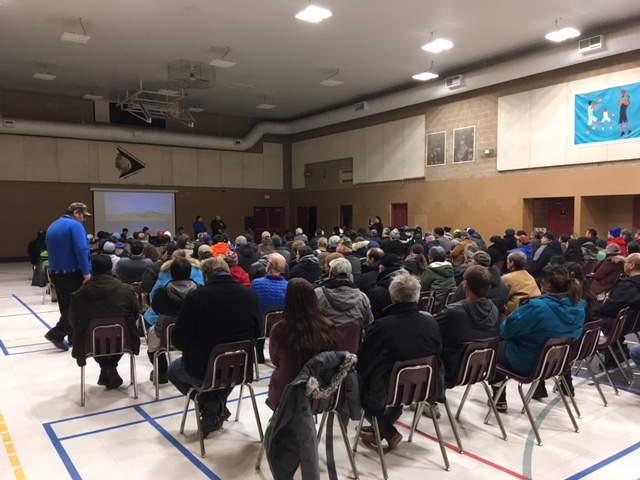 Over 200 hundred people attended a public information meeting in La Ronge Wednesday evening which was organized by a company which hopes to develop an open pit mine in the area.

Garcia Silica has already acquired the mineral rights to about 43 square kilometres of Crown land, which is located south of La Ronge.

Company CEO Camilo Garcia spoke with MBC before the meeting.

He says his plan is to build a quarry in an area where the silica sand reserve is estimated to be over two billion metric tonnes.

Garcia says the environmental study of aquatic life, caribou and migratory birds in the area will begin in the spring and will be done by scientists working for a consulting company.

Many of the people who attended the gathering appeared to be curious about the many jobs the company says will be available for local residents.

After a slide presentation lasting about 20 minutes, questions from the audience began, and that is when environment issues took centre stage.

The Duty to Consult First Nations and Metis groups was also an issue raised.

He says the Duty to Consult process on a proposed project of this magnitude must be triggered by the provincial government, and that has not happened yet.

Issues about water usage, caribou habitat and trap lines in the area were also raised.

Silica sand is used in the construction industry, as well as for things like ceramics, glass, computer chips and even solar panels, but questions were raised more than once about whether or not the sand would be sold by companies involved in hydraulic fracturing or “fracking”.

Development of the open pit mine, which would be the first one for Garcia Silica, is still in the early stages.