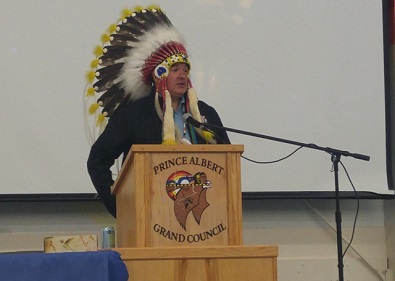 The Federation of Sovereign Indigenous Nations is asking for an apology from Canadian Tire for an alleged incident involving a First Nations elder earlier this week.

The FSIN says the incident happened at the North Battleford store where 77-year-old Gordon Albert was accused of theft.

According to the FSIN, the elder was then allegedly searched by a Canadian Tire employee.

In a news release, FSIN Chief Bobby Cameron called the alleged incident an “insult” and suggested the family file a human rights complaint.

“This has to stop. Stores must train their employees to get past racial profiling. First Nations people are tired of being followed around in stores and accused of theft when they are just trying to shop for their families,” said Chief Cameron in the release.

The daughter of the elder was also quoted in the release as asking for Canadian Tire to “deal severely with the employee responsible.”

“If I can stop this from happening to another Elder, then at least my father’s embarrassment wasn’t for nothing,” said Trina Albert of the Sweetgrass First Nation in the release.

The following is a statement provided to MBC on the matter from a Canadian Tire spokesperson.

“Similar to most retailers, Canadian Tire stores have sensors installed as security measures. In this particular situation, the sensor at the store exit was triggered as the customers left, and as per our normal process, store staff inspected the shopping bags for any unremoved tags. After learning that the sensor was triggered by a tag on a product purchased elsewhere, Mr. Albert and his son left the store. Recent conversations between the store and Mr. Albert and his family have been positive and productive, and the store considered the matter to have been resolved,”  said the Canadian Tire spokesperson.

Canadian Tire representatives have not been immediately available for comment.

This is the latest incident of alleged racial profiling in Saskatchewan department stores over the past year.

In November, a Giant Tiger employee in Regina was fired after a video surfaced of the employee following an Indigenous man through the store.

In July, 53-year-old Kamao Cappo was forcibly removed from a Canadian Tire store in Regina after being accused of theft.