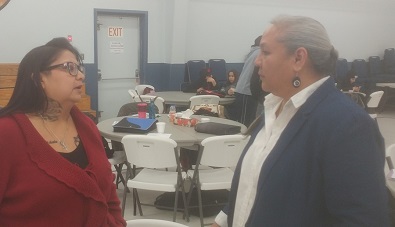 Dr. Raven Sinclair (right) speaks with someone at a conference at the Saskatoon Indian and Metis Friendship Centre. Photo by Joel Willick.

Last month, Ottawa announced in principle a settlement of $800 million dollars for the Indigenous survivors of the Sixties Scoop. A settlement that excluded the Metis people. Metis leaders immediately criticized the decision.

Dr. Raven Sinclair is a survivor of the Sixties Scoop, a professor of Indigenous social work and an expert in Indigenous child welfare. She says she feels the decision to exclude the Metis didn’t make any sense.

“It just strikes me as really odd that we are recognized in the constitution as Aboriginal people that include Inuit, First Nation and Metis, and they decide to dismiss an entire group,” she said. “Constitutionally, it just seems really problematic.”

Sinclair says in her own experience as a Sixties Scoop survivor, she was even labelled as Metis, along with many others because she says it “enhanced their adoptability.”

“In Saskatchewan, it was the Adopt Indian and Metis program, so how can you arbitrarily distinguish between those groups and decide to exclude one particular group?”

Sinclair says one of the reasons she heard for Metis exclusion was that it would be hard to track Metis people because status children were under bands and were more easily trackable.

“I don’t agree,” she said. “Social Services is going to have all of those records.”

Sinclair says a Metis class action lawsuit might be on the horizon for the Metis survivors of the Sixties Scoop.

She was one of the speakers at a conference at the Saskatoon Indian and Metis Friendship Centre in Saskatoon on Wednesday.

Organizers say the goals of the “Revitalizing from our Grieving Spirit Gathering” is to educate the community to the realities First Nations and Metis Canadians faced and continue to face.

The conference runs throughout the week and will discuss topics like the Sixties Scoop, residential schools, as well as missing and murdered Indigenous women.