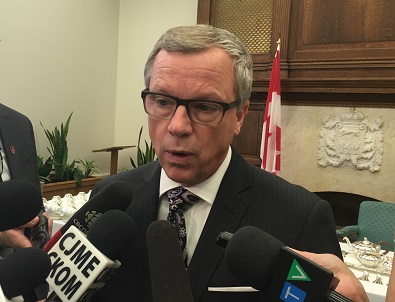 The accusations come from the B.C. Metis Federation, and involve remarks made by the premier about 10 months ago.

The words in question were used by the premier during a nomination meeting speech in Saskatoon on January 30, 2017. Brad Wall was speaking during the nomination of Delbert Kirsch, the Sask. Party member for Batoche.

The premier used Kirsch’s own words to poke fun at him, repeating some off-handed comment Kirsch made when he was first elected to the legislature in 2003.

“Delbert Kirsch is the member for Batoche. There’s Delbert, we each get to make a speech in the legislature, and Delbert’s I will never forget. Delbert stood up in the legislature, looking like he’s looking right now. He’s got a nice beard, and said a number of wonderful things about his constituency and his team and how happy he was to be elected to the Legislative Assembly,” said Wall.

“But then he confessed to being a little bit nervous, he said, based on the historical reality that happened to the last bearded man that came down from Batoche to the City of Regina (laughter). That’s one of the best lines I’ve ever heard.”

The story was published in the B.C. Metis Federation newsletter this summer, but has never received much coverage in Saskatchewan.

B.C. Metis Federation President, Keith Henry, has expressed his outrage over the remarks, saying such comments about the wrongful hanging of Louis Riel are insensitive and foolish, especially during a time of reconciliation and respect.

The premier has not been immediately available for comment.