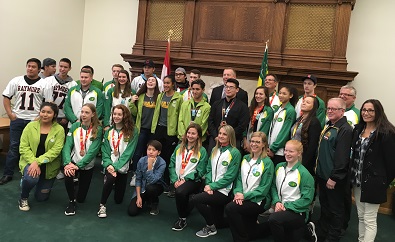 The North American Indigenous Games were held in Toronto, and featured Saskatchewan athletes competing in 14 sports, including archery, canoeing, volleyball and wrestling.

Saskatchewan Parks Culture and Sport Minister Gene Makowsky congratulated the athletes for the countless hours they spent honing their crafts, and for making the province proud while showcasing their talents.

“I don’t think you ever coach to be recognized. For me personally, it’s about exposing kids to sports and the benefits of competition,” said Don Larson, the head coach of the gold-medal winning lacrosse team at the NAIG. “I’m just kind of there along for the ride. And the successes they have, that is just a bonus for me, seeing them succeed at the games they love.”

Larson also served as a coach in the Tony Cote First Nations Summer Games, which were held in Regina in August.

The games in the provincial capital drew 5,000 athletes, coaches, chaperones and officials from 74 First Nation communities in the province. Athletes competed in nine sports, including golf, soccer, softball and beach volleyball.

Saskatchewan athletes who participated in the 2017 Canada Summer Games in Winnipeg were also honoured today.