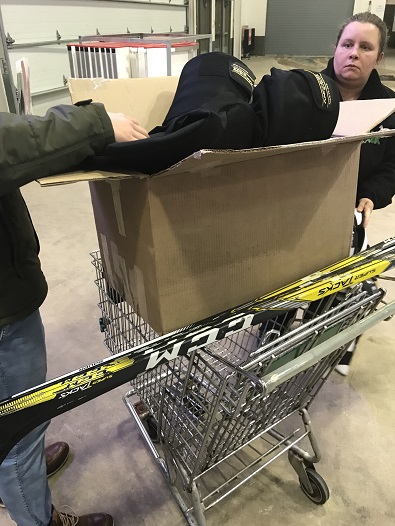 *UPDATE – The Yorkton RawTec Maulers have released a statement saying: “Although we do not condone the use of profanity, we support the message that was delivered by our coach.” The Maulers also say Coach Kevin Rawlick has been placed on probation for the rest of the season because of the profanity. According to the statement, Rawlick “supports and is in agreement with the directive and he will enroll in and complete the Respect in Sport Program for both the Coach and Parent programs, no later than December 15, 2017.”

The profanity-laced scolding of an Indigenous hockey player by a Yorkton hockey coach has gotten the attention of the Federation of Sovereign Indigenous Nations.

The FSIN has called for “quick” and “tough” action by governing hockey authorities in the matter of 16-year-old Ochapowace First Nation product Josh Bear.

The teen recorded his coach’s reprimand on his device during a November 10 meeting and was subsequently released by the Yorkton RawTec Maulers Midget AAA team three days later.

His family also says Bear’s hockey equipment was left in a box outside the rink, and some of it was missing by the time they arrived to pick it up.

Bear’s parents are calling for the removal of the coach.

The boy’s father, Tim Bear, says no youth should have to endure that.

“This stuff should not be kept quiet,” he says. “These days, and Hockey Canada’s course of Speak Out, are huge in that aspect of hockey. I know this is wrong, and that’s why I’m bringing it to the attention of other people out there because at some point you have to remember that hockey is just a game.”

But even though the coach’s scolding was recorded on his son’s phone, Bear says they haven’t seen a lot of action by governing hockey officials.

“We’ve had discussions with Midget AAA that seem to be not progressing,” he says. “You know, Hockey Canada, this is their Speak Out program, I wish they would get involved at some point. Even an email responding to the information I sent to them. Not even that took place yet.”

Bear says the hockey community, in general, has been slow to respond.

“The meetings are moving forward, slowly,” he says. “But, again, there’s no clear-cut direction when someone brings this to the light. Even the media, the media is struggling with this right now because it’s such a kept quiet secret always.”

Saskatchewan Midget AAA Hockey League president Lloyd Friesen says it’s not up to the league to act in cases like this.

Friesen indicated the Saskatchewan Hockey Association and Hockey Canada only become involved in a matter such as this if the local minor hockey association doesn’t handle it properly.

Tim Bear says they are still waiting for the thousands of dollars in registration fees for the rest of the season they want to be returned by the team.

He also says a rule in the SMAAAHL prevents Bear from being able to play for a rival team for the duration of the season, something Friesen confirmed.