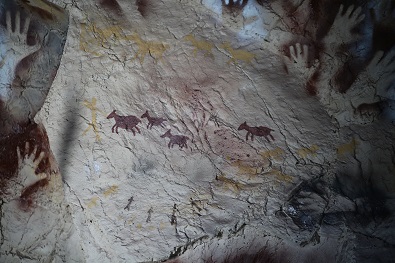 A cave painting made on set for the series. Photo courtesy of Barbra Hager.

The mini-series 1491: The Untold Story of the Americas before Columbus, will be showcasing the lives of First Nations people in the times before the arrival of European explorers.

The series is a joint production between Animiki See Digital Production and Aarrow Productions, and will feature scenes of drama interlaced with documentary segments. Inspired by the book of the same name, the television show will aim to share the Indigenous history that has been lost to time.

“We had achieved a lot in our cultures and our societies, we were thousands of nations,” said the show’s producer and director, Barbra Hager. “We’re trying to open people’s eyes to the fact that we had the thriving world here in the Americas, and that’s not usually taught here in schools.”

1491: The Untold Story of the Americas before Columbus will run on APTN for eight weeks starting on November 8.