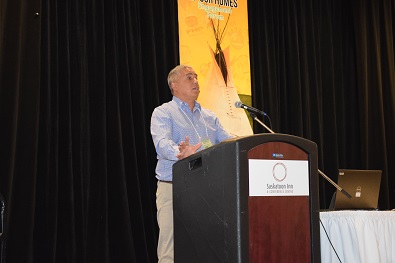 According to a First Nations Chief from Ontario, rent-to-own policies have been extremely beneficial for housing in his community.

Chief Franklin Paibomsai of Whitefish River First Nation says his reserve has 190 houses, and nearly half of them are under their rent-to-own policy. This is where members of the First Nation pay rent on band-owned houses, with an agreement that they will one day own the house.

Chief Paibomsai says the policy has brought a strong level of hope to the community.

“We tell them that housing is a shared responsibility and ask if they will share that journey with us,” he said. “They then see a vision of being grandparents in their house and having their children come over and they choose home ownership.”

Chief Paibomsai was a keynote speaker at an FSIN housing forum in Saskatoon.

“This is another example of something that is working in a First Nation community,” said FSIN Vice Chief Dutch Lerat, while speaking on the address. “We can build on what he said.”

During Chief Paibomsai’s address, he spoke about many other opportunities available to address the challenges of First Nation housing as well.

“We have endless opportunity here, we just have to turn on our imagination,” he said. “There are solutions for everybody as long as we can be imaginative on what those solutions can be.”

According to the Ontario chief, there is nearly $24 billion up for grabs in housing on First Nations. He says local and non-homogeneous options can open up this opportunity.

“Yes we have challenges, but I am her to tell you there are great opportunities,” he told the forum.

In addition to being the current chief of Whitefish River First Nation, Paibomsai is also a civil engineer, who has been a part of several First Nations housing initiatives in Ontario.

Whitefish River is about 110 kilometres southwest of Sudbury, Ontario.