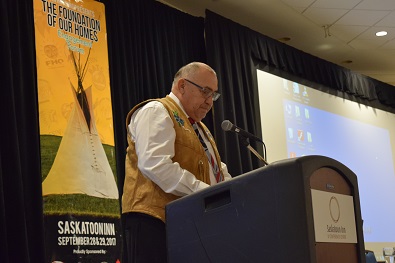 Hundreds of people gathered at a forum in Saskatoon on Thursday aimed at discussing updates to Indigenous housing policy.

The two-day forum is titled Foundation of our homes, and is hosted by the FSIN. Over the next two days, several presenters will be leading engagement sessions, asking for community input to modernize Indigenous housing policy.

According to Federation of Sovereign Indigenous Nations Vice Chief Dutch Lerat, the most recent national housing policy is from 1996, and he says the policy is dated.

“So we are looking to break those barriers down and get more of a realistic perspective of our housing needs in Saskatchewan,” said Vice Chief Lerat.

According to Lerat, the numbers of Indigenous people in need of housing in Saskatchewan show desperate times. He says they are in need of over 12,000 homes, with a need for 4,600 in Prince Albert alone. Lerat also says Indigenous communities average 5.5 people per home, which is more than double the average of 2.7 per home.

He hopes the forum will help develop better policy for 2017 and beyond to address these numbers.

“The policy we are living under is from 1996, and now we have a new federal government that is open to First Nation developments, so we are seeing a window of opportunity where we can start addressing these outstanding needs with this new government,” said Lerat.

Two more housing forums are planned in the future, with specific goals of discussing infrastructure and water needs when it comes to Indigenous housing. Lerat hopes to bring the ideas discussed at these forums to a national level.

While the Vice Chief admits there may not be concrete decisions coming from these forums, he does say it is important to get the discussion started at a community level.