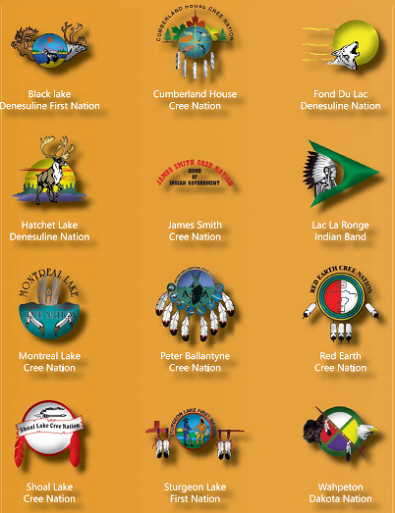 Logos of Prince Albert Grand Council member First Nations.
The candidates have been announced for the upcoming Federation of Sovereign Indigenous Nations election.
The vote for the positions of second and fourth vice-chiefs will be held next month.
For the position of Second Vice-Chief, the candidates are Simon Jobb, David Pratt and Lyle Whitefish.
Incumbent Second Vice-Chief Bob Merasty is not seeking re-election.
The three people running for fourth vice-chief are incumbent Heather Bear, Fenton Favel and Dolores Pahtayken.
The FSIN election for these positions will be held October 25 and 26 in Saskatoon.
Meanwhile, the Prince Albert Grand Council has announced the candidates for next month’s Grand Chief election.
The candidates to succeed longtime PAGC Grand Chief Ron Michel are Elmer Ballantyne, Brian J. Hardlotte and Charles A. Whitecap.
The election will be held over the PAGC Annual Assembly on October 23 and 24 in Prince Albert.
Michel announced last year he was not going to seek re-election.
He was first elected to the position in 2005.