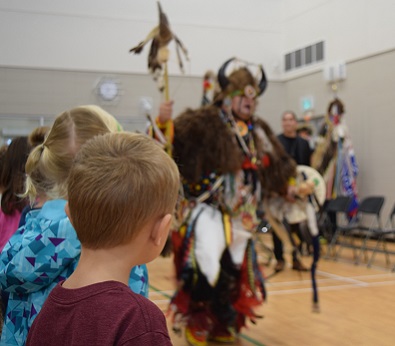 The elementary school is part of a unique partnership between Whitecap Dakota First Nation, Saskatoon Public Schools and the federal and provincial governments.

“This cooperation and teamwork has given us a school that has transformed this community and is a welcoming space for our children and families in Stonebridge and Whitecap Dakota First Nation,” said Saskatchewan’s Minister of Education Bronwyn Eyre.

The school includes students in grades 5-8 from Whitecap Dakota First Nation and K-8 students from Stonebridge.

Whitecap Dakota First Nation Education Councillor, Dalyn Bear, says the school marks a significant milestone for the city and the First Nation, which will give students from both Whitecap and Stonebridge a chance to succeed.

“It was a vision that Chief Bear and the rest of council had the past few years to get Chief Whitecap’s name on a school, and we think it is a big step in reconciliation and moving forward,” said Bear.

Councillor Bear also spoke highly of the partnerships that were formed in order for the school to become a reality.

“We want to open our doors to any level of government or business,” he said. “We want to move forward in partnership, hand in hand as a community and together as one nation.”

The new school will also see the introduction of a new curriculum that will incorporate Indigenous perspectives of history, culture and language. Apart of that curriculum is a timeline wall in the entrance of the school documenting the history of Canada’s Dakota Peoples. One of the murals details the entire history of Chief Whitecap and John Lake founding Saskatoon.