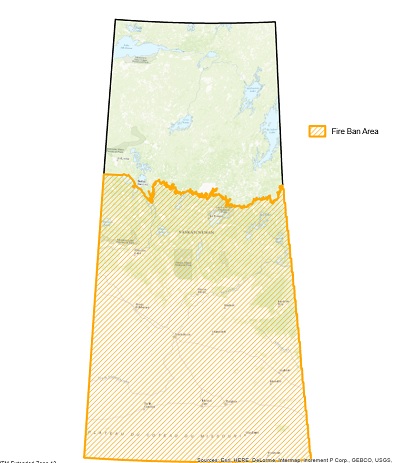 Photo courtesy of the Government of Saskatchewan

Extreme wildfire hazards in Saskatchewan have prompted the Ministry of Environment to ban all open fires for all provincial Crown land and for provincial parks and recreation sites south of the Churchill River to the U.S. border.

The ban affects all provincial parks and recreation sites in the ban area, including Lac La Ronge Provincial Park.

For the duration of the ban, the province says no open fires are permitted. Fireworks are also prohibited. Self-contained heating devices, pressurized stoves, gas barbecues, propane firepits, or charcoal briquettes used in an approved firebox will be permitted for cooking and heating purposes during the ban.

The fire ban is effective immediately and will stay in place until conditions improve and the Ministry of Environment rescinds the order.

The province notes that municipalities, as well as regional and national parks, may also ban open burning in their areas of responsibility.

Members of the public are encouraged to check with their local authority to find out if there are burning restrictions in place for their area.

Parks Canada says a ban on all open fires has now been put into effect for all of Prince Albert National Park. It says this includes a ban on fires in camp kitchen shelters, and in cabins and cottages in the park.