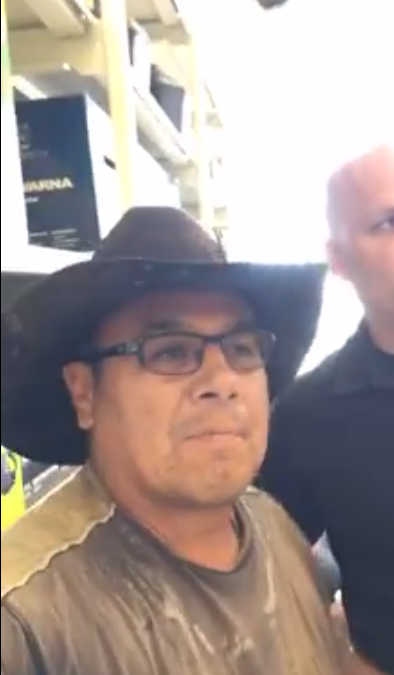 The Regina Indigenous man who shamed Canadian Tire says he is not comfortable with the idea of meeting face to face with company officials who have issued a public apology for the way he was treated.

He says he doesn’t trust them and is actually afraid to meet them on his own at their offices, noting they “want me to go there where everything is secure for them” but have not offered to visit his reserve.

Kamao Cappo was forcibly removed from an east Regina Canadian Tire store last week, he says after being accused of theft. He recorded the altercation as the store employee forced him out. The video became viral and sparked outrage. On Friday, dozens of people both Indigenous and non-Indigenous showed up at the store to hold a protest march.

Cappo says he was surprised by all the attention and support from such a broad cross section.

“Some of the people event cried, they messaged me, and how this brought them to tears that someone would be treated this way,” he said. “My respect for Canada sure went up, I’ll tell you.”

Cappo says he is in the process of getting a lawyer to represent him in any discussions with Canadian Tire.

Canadian Tire has issued a public apology, has made several attempts to meet face to face with Cappo and also sent out a tweet indicating the employee involved in the incident is no longer with the company. Earlier, the company issued this statement: “Treating our customers with respect and courtesy is a core value of our company. We wish to again state that we have taken this matter very seriously and we have already taken steps to raise awareness and re-educate store staff on our values.”

Regina police are also investigating an assault complaint filed by Cappo. There is no word yet on whether charges will be laid.