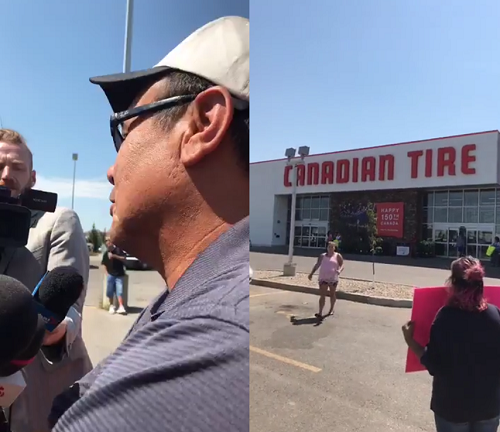 A rally took place outside an east Regina Canadian Tire on Friday in response to a video that surfaced earlier in the week of a physical confrontation between a store staffer and a Muscowpetung First Nation man.

That man was 53-year-old Kamao Cappo, whose Facebook live video has been viewed hundreds of thousands of times since it went up on Wednesday. He says the video picks up from an earlier false accusation by the employee that Cappo was stealing.

Cappo, who said he “entirely” believes the incident occurred because of the colour of his skin, said the video shows what Indigenous people face on a regular basis.

“Without the video, no matter what happened I would be powerless and helpless. No matter what I stated, it would be just washed away but because of the live video then it’s obvious,” he said to reporters outside the Canadian Tire on Friday, captured in a live video on FSIN Vice-Chief Jim Jonathan’s Facebook.

Cappo now has a large group of vocal supporters who are calling the incident racial profiling, including FSIN Chief Bobby Cameron.

A group of Indigenous drummers played as a group of several dozen people marched, some holding hands, through the store’s parking lot. One girl held a sign with the words “racial profiling” crossed out, and two other women held a sign saying “skin colour is not reasonabe suspicion.”

Earlier in the day, Cappo told MBC the public outrage by people of all races has been heartening because it shows businesses this type of treatment is not acceptable.

“To see that there are good-hearted white people who will stand up and defend somebody they don’t even know against an injustice is truly heartwarming. And I don’t know, I think those people are angels,” he said.

Cappo said his spiritual beliefs drive him to fight for racial equality.

“The ugly part of fighting for racial unity and harmony is you’ve got to face these injustices. So when I stood up to this man, I knew he was doing wrong and whatever punishment he chose to mead out to me, like you can see he’s throwing me against the wall, he’s choking me… I took that for our children and the Indigenous women and the Elders,” he said.

Cappo said his experience shows that you need to stand your ground but also follow the law when people mistreat you based on race.

He has gone to police but from his understanding, there are no charges laid at this time.