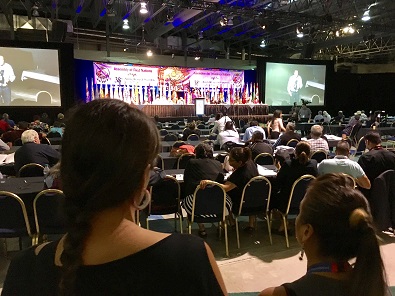 The Assembly of First Nations is calling for major changes to the commission of inquiry into missing and murdered Indigenous women, but it has rejected a call for the resignation of the remaining commissioners and a complete reset of the inquiry.

The two resolutions came up for debate during the closing hour of the three-day national assembly in Regina. It was followed by tearful presentations by families of victims. Many of them said the inquiry was a failure and needed a fresh start.

AFN Chief, Perry Bellegarde, says those voices were heard and their concerns will be taken to the prime minister. He says there will also be a request to increase the budget for the inquiry and to provide money for families.

Manitoba Grand Chief, Arlen Dumas, says the inquiry has already spent about $11 million of its $54 million budget, and has accomplished very little over the last year. He says it is time to hit reset.

“The fact that they were not transparent, the fact that they had not delivered what they wanted to deliver and unfortunately and objectively, judging by those statements, I have to stand strong by our motion coming from Manitoba.”

The Manitoba motion was defeated with 60 per cent of the delegates voting against it. Despite losing the vote, Dumas says the motion delivers a strong message to the federal government, one he hopes it will listen to.

The commission of inquiry began its work in September of 2016. Since then, it has held only one set of hearings in Whitehorse.

It has also had to deal with the resignation of its executive direction and commission member Marilyn Poitras of Saskatchewan. There have also been ongoing problems maintaining its communication staff.