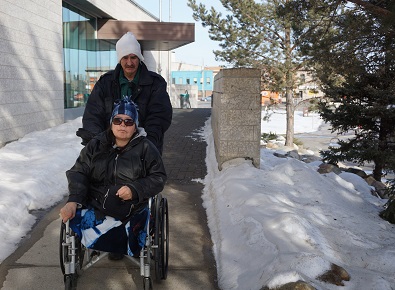 Marlene Bird and her partner Patrick Lavallee outside court on March 15. Photo by Chelsea Laskowski.

The decision on whether Leslie Black will become a dangerous offender is now in the hands of a Prince Albert judge who says he is delaying retirement by several months in order to make a judgment in the case.

Closing arguments were delivered to Judge Loewen in Prince Albert Provincial Court on Friday morning, with Loewen saying his late August decision in the case will be his last. Prosecution is seeking a dangerous offender designation and indeterminate sentence for Black in relation to his June 2014 attempted murder of Marlene Bird.

Black met Bird and spent the night with her in downtown Prince Albert before beating her and lighting her on fire, with doctors saying gasoline had been used. Bird is now permanently blind in one eye, has a number of skin grafts, and uses a wheelchair after her legs were amputated from the injuries she endured. Black entered a guilty plea to attempted murder years ago.

On Friday, Black was in attendance in the prisoner’s box, wearing prison-issued grey sweater and green pants with his arms resting on the bench beside him.

Prosecutor Jeff Lubyk argued a special clause of the criminal code, which states someone can be labeled a dangerous offender if the brutality of the offence indicates “the offender’s behaviour in the future is unlikely to be inhibited by normal standards of behavioural restraint.”

Defence lawyer Brent Little countered that Black shows no patterns of violence before or after the offence, all in spite of a turbulent and traumatic childhood in which he witnessed his mother murdered in front of him. Little argued that psychiatric and psychological experts have provided no evidence that Black will offend in the same way again, and said if that interpretation is correct, “there’s no way that Mr. Black can be a dangerous offender.”

Additionally, Little said “this isn’t a treatment-adverse individual,” and that if Black is labeled an indeterminate dangerous offender, services would be limited.

Instead, the defence says a long-term offender label is appropriate. He suggested a life sentence of 10 to 15 years, with a 10-year supervision order, would provide the denunciation and deterrent that is necessary for such a brutal crime.

“Don’t throw the key away on him,” Little said, adding a formal request for Loewen to recommend that Black serves his penitentiary sentence out of province due to safety concerns.

Lubyk said if the dangerous offender designation is unsuccessful, he’s seeing a lengthy sentence and a long-term supervision order of 10 years.

Bird did come into court at the end of arguments, but only remained there briefly. She’s been active in the community in recent days, attending a Thursday walk to honour those who have been murdered or gone missing in the city.

Black will remain in custody at Regina’s Correctional Centre where he’s spent most the past three years, as Loewen takes until the end of August to make his final decision.