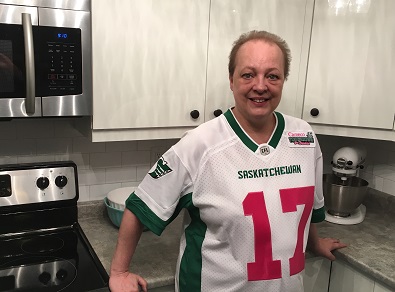 Cameco, along with the Saskatchewan Roughriders and a Regina custom kitchen company, have made a dream come true for a Regina woman who is battling life-threatening liver cancer.

Susan Harty, 50, wanted a new kitchen, a place where she could bond with her teenage daughter and build memories. Today, that wish was granted. She was overwhelmed when she got her first look.

“Shock, absolute shock, but in a good way,” she said.

It’s more than just a kitchen to Susan Harty. When she was a teenager, her mother encouraged her to join her in the kitchen to learn how to cook and share memories. Before that could happen, her mother died of cancer. She wants to make sure her 13-year-old daughter, Alyssa, gets the chance she never had.

“My daughter and I spend a lot of time in the kitchen, she has a thirst for knowledge and get prepared for life lessons, and she loves to bake,” she said.

Alyssa Harty, 13, is thrilled for her mother and delighted with how the kitchen turned out. She looks forward to lots of quality of time.

“The opportunity to cook with my mother that she didn’t have as a child growing up is just incredible,” she said.

Normally this kind of renovation, valued at $40,000, would take a month, but Cameco volunteers, along with staff from Bella Vista Kitchens got it done in just four days. Cameco spokesman, Jonathan Huntington, says everyone wanted to pitch in.

“For us at Cameco, our staff loves being involved with it, it’s just that simple,” he said. “They want to volunteer to help paint, and to help make projects become a reality.”

The Cameco Touchdown for Dreams program is now into its sixth year. Seven dreams will be granted this year to women facing a life-threatening cancer diagnosis. One of the winners is from Jackfish Lake.

Normally there are about 50 applicants for the program a year, nine were from areas north of Saskatoon last year.

Since the program began, 33 wishes have been granted. Sadly, more than half the women who received their dream wish have since passed away.