Bear encounters on the rise 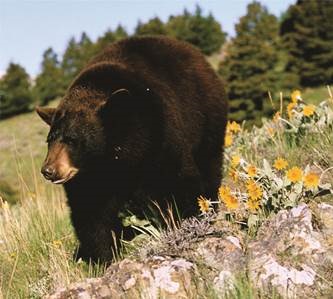 Provincial environment officials are warning people that encounters with black bears are happening more often at this time of the year.

Within the last week, Saskatchewan Environment has received a number of calls about black bears near the communities of La Ronge and Otter Lake.

Saskatchewan has a healthy black bear population and they are moving around more as berries become more abundant in the northern forests.

Brock Lockhart is with Saskatchewan Environment in Creighton and says bears are on the move and it’s not uncommon to come across a bear while hiking or camping in the backcountry.  He says that bears will be attracted to other scents such as human food and garbage until most berries become ripe, so he says it is important to store food properly in sealed containers and remove any garbage from a campsite to a landfill.

He says if you do encounter a bear, the best thing to do is remain calm and speak to the bear is lower tones.

“Most bears are cautious around humans and they rarely charge or show aggression to people,” says Lockhart. “If you do encounter a bear, it’s important to stay calm and don’t run.”

He says if people do happen to come upon a bear, the best thing to do is make a wide detour. He says don’t look directly at it as the bear may take that as a challenging stare.

Lockhart says people shouldn’t try to feed bears or get close to try and get a picture.

“That’s a dangerous situation,” he says.  “Bears that have lost their fear of humans by being fed or common encounters can cause harm to humans or property damage and it’s not a good situation to get those bears habituated to people.”

As for other tips that people should take into consideration if they live in bear country or are camping in the back country, Lockhart says that food should be stored in sealed containers, keep barbeques clean and garbage should be handled in a manner that supports living with bears, which he says means it should be kept inside or disposed of at a landfill.

Lockhart says that most black bears will threaten but not attack.  He says if you are attacked, defend yourself.  Stand up tall, hit and kick and punch the bear as best you can. And he says never play dead.

He says if people find themselves in a potentially dangerous situation with a bear or other predatory animal, they should call the local conservation officer or the Turn In Poachers hotline at 1-800-667-7561.